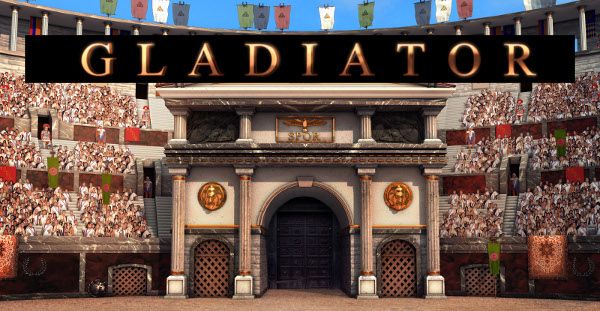 Gladiators were much revered in Ancient Roman. The ultimate male. Men wanted to emulate you and women wanted their way with you. It was a sport in which losing was not an option, you fight your way to the big win or die. Only the mighty will receive honor and unimaginable prizes. This top-drawer slot boasts top of the range 3D graphics and a strong storyline, allowing it to be comparable to the likes of a movie like Gladiator. Dramatic music sets the scene for the epic journey to some impressive wins. Players can enjoy the state-of-the-art game on their desktop, laptop, and mobile devices.

Throwing it Down for the Win in the Big Arena

Gladiator plays itself out on 5 reels with three rows and up to 30 paylines; dark marble columns frame the reels which are separated by ornate gold-trimmed strips giving a regal feel to the interface.

Betsoft has perfectly portrayed a thrilling atmosphere that will have you on the edge of your seat. Gladiator tells a heroic story worthy of any great warrior. The 3D graphics are outstanding and help tell the tale of our strong Gladiator. The backdrop was not just an afterthought it was mindfully crafted to add to the authenticity of the game. Wins were epic, graphics excellent and the gameplay was a breath of fresh air. This was a slot to remember that will thrill anyone who dares to step into the arena.

Where to Play Gladiator