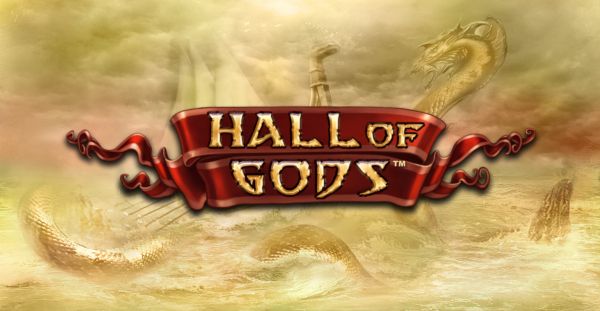 Hold onto whatever you can find because the Viking fleets are sailing the high seas and bringing all that Norse mythology to your screen. Hall of Gods is a magical NetEnt slot game of legendary proportions.

It has all the elements of Norse mythology that everyone knows, together with a few distinct twists that make it an incredible game for the jackpot seekers out there. The abundance of imagery, slick graphics and soothing sound effects are just the package in which those legendary jackpots are wrapped.

Like many other NetEnt games, Hall of Gods is also a very simple game to strategize on at its core. The difference is that it gives players many more avenues to win than other NetEnt games. In order to do so however, it does take away some strategy options from players. Hall of Gods will not let players choose how many active pay lines they will like to have for example. This means that players spin on 20 active pay lines automatically all the time. The only thing left to strategize with is the bet level. Some players will see this as a disadvantage, while many others will see it as an opportunity to enjoy the great imagery of Norse gods, the exquisite graphics and the soothing sound effects while they play for some of NetEnt’s fattest jackpots.

Hall of Gods is all about Norse gods and myths. This means that the game has a lot of symbols and by extension, tons of ways to make players rich. First of all, there are 3 types of progressive jackpots on the game: the big one, the medium one and the small one. The big one can go well into the €2 to €3 million range, while the medium one is in the hundreds of thousands and the small one is in the tens of thousands. Hitting any of those jackpots is largely a function of the bonus features that the game offers, which include a mini-game and some other features that sweeten every spin. Here is a brief list of those bonus features that can reach mythical proportions:

Hall of Gods is one of the great jackpot games that NetEnt has designed lately. Players will be able to enjoy a game full of great imagery that features gods like Odin, Thor and Loki. They will also be able to become a god themselves when they hit one of those huge jackpots! NetEnt’s Hall of Gods is tempting beyond belief, and once it captivates you, its mythical dimension will provide top notch entertainment with some of the biggest wins out there.