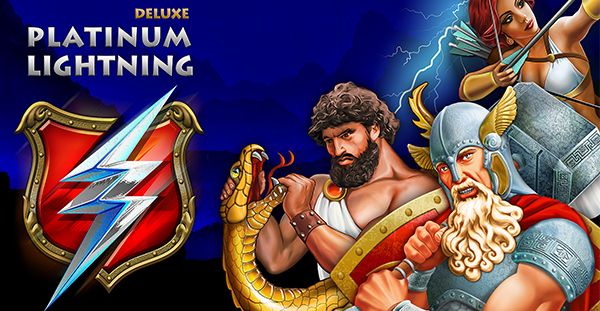 Mount Olympus is the highest mountain in Greece and is situated on the border between Thessaly and Macedonia. This mighty mountain is most well known in Greek mythology as the home of the Greek gods, who reside on Mytikas peak.

In ancient Greek religion and mythology, the twelve Olympians where the Gods of Greek mythology and they included Zeus, Hera, Poseidon, Demeter, Athena, Apollo, Artemis, Ares, Aphrodite, Hephaestus, Hermes, and either Hestia or Dionysus. If Greek mythology is something that gets you excited, then this beautifully crafted slot is for you.

Visually the Platinum Lightning Deluxe video slot is spectacular and boasts top quality graphics. Legendary gods and warrior titans fill the reels with all their impressive skills and mighty strength. Framed by majestic statues, the entire design brings with it ideas of epic heroism. Combine the stunning visuals, classic greek sounds and lavish bonuses and this slot screams big wins and entertainment, making it an adventure you won’t want to miss.

Ruled by the Gods

In Ancient Greece, the Greeks believed that to be successful and prosper you had to obey the 12 mighty gods. While playing this great game, you may not be required to follow any rules or make sacrifices you may want to have a look at the best way to win on the reels. 5 reel and 25 paylines will have you feeling like a God with its bountiful wins.

All those fans of Greek Mythology out there will be absolutely enthralled with this magnificent slot beautifully crafted by Bgaming. This stunning slot will draw you in with masterpieces worthy of any great artist, including Michelangelo. The excellent graphics are paired with traditional Greek music that will have you feeling optimistic, which is never a bad thing with money on the line. If the music doesn’t get your spirits up, then the bonuses and big wins surely will. So if opulence and spectacular rewards are your thing, then this is the slot for you.

Where to Play Platinum Lightning Deluxe