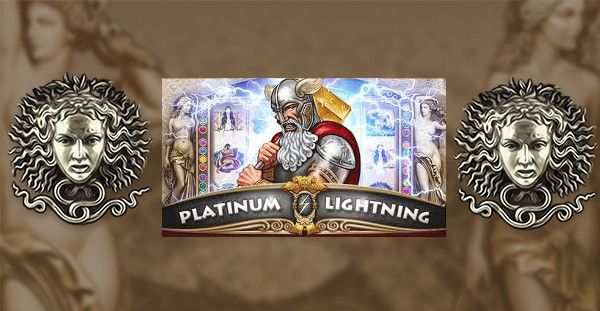 In Greek mythology, any of the children of Uranus and Gaea and their descendants were known as the Titans, and there were 12 original Titans. By the goading of their mother Gaea, the Titans rebelled against their father, who had shut them up in the underworld Tartarus. Zeus the bravest son rebelled and freed his siblings to the TitansPlatinum Lightning by BGaming tells the heroic story on reels that represent this heor vs villain game perfectly.  BGaming has done an excellent job capturing the beauty elegance and power with reels set between two curvaceous sculptures that would have made Michelangelo proud. All of this beauty is coupled with bonuses and features that will reward you Bitcoin worthy of the gods and is tied together with a traditional Greek jingle that genuinely makes this slot an all-rounder.

Please the Gods with Platinum Lightning

Everyone knows that if you want to prosper it is essential to please the gods and lucky for you the Gods of this slot do not require any human sacrifices. All you need to succeed is a little bit of know-how, and you will be making your way around this 5 reel and 25 payline slot like an absolute champion.

Platinum Lightning is a slot that will have mythology geeks drooling! BGaming has absolutely outdone themselves in every aspect of this Bitcoin game, leaving little to no room for improvement. The graphics are a sight to behold and coupled with some fantastic multipliers there is really not anything not to love about this exquisite Bitcoin slot.

Where to Play Platinum Lightning