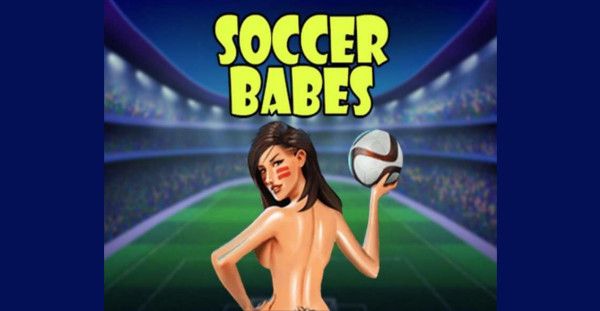 Soccer is the highest paying sport in the world. The most watched and bet on. What comes with this is lots of cash, fast cars, and even faster women. WAGS, that is Wives and Girlfriends of Soccer Players, are a pretty fine breed and put Hollywood wives to shame. Groomed and botoxed to maximum proportion. Brazilian Hair, Gel nails and 28-inch waist and double D kahoona’s.  Nothing that $96 million in annual earnings can't buy to make your girl sex goddess fit.

Spinomenal has taken a leaf out of the WAGS page when designing this slot. Not ever has there been such a raunchy version of soccer played out on the reels by other soccer offerings.  This game has no real bells and whistles to talk of.  A soccer stadium hosts this lively game of 2D graphics that certainly crank up the blood pressure.

The fast-paced music keeps the atmosphere alive.  Lucky for those of you using any device you get to look at these poster perfect babes at any time, as this game is a win on all devices. Let’s look at how Soccer Babes fares in the gaming department because Spinomenal scored a winning goal with the graphics.

Soccer Babes plays on a field of 5 reels and 5 paylines. A rather old fashioned format. The medium volatility kept goals coming.

Sizzling Hot is the phrase to be used for the characters.  The three medium paying symbols are the very scantily clad ladies.  I don’t think in my entire career of reviewing games, have I seen a thong that small.  The lower paying symbols are all the soccer paraphernalia you would expect to find in and around a match.  Boots, Flags, Balls, Goal Sign and a winning Trophy

There is a Scatter symbol, and it is the very hot young lady with a ball under her arm.

The Wild is the girl with the bikini top that is approximately ten sizes too small for her newly enhanced boobs.  She can, however, replace all symbols except the Scatter.  So pretty soon you could have a whole lot of her all over your screen.

Spinomenal has kept it simple in the controls department so you can lose control watching the bevy of beauties before your eyes.  The controls are symbols which reference  Pay Table, Home and Sound on the left and the right-hand side is home to Play and Autoplay.

The Multiplier Meter goes up 1 after each unsuccessful spin.  When you spin a winning bet, the multiplier will multiply your win by whatever it is on at the time and will then reset itself.

This saucy slot will pay on winning lines both left to right and right to left.

4000 coins are on offer as the maximum win in the saucy Soccer Babes slot.

I don’t think any male, to whom this will mostly appeal, will be paying attention to the performance of the slot or any other game.  The visual eye candy will have their eyes glued to the reels, whether there are features or not.  There is only the Free Spin round that qualifies as a feature.

I recommend this game to red blooded men worldwide.  For me, I did take note of the predictability and simplicity in game play, so perhaps not for the more features driven player.