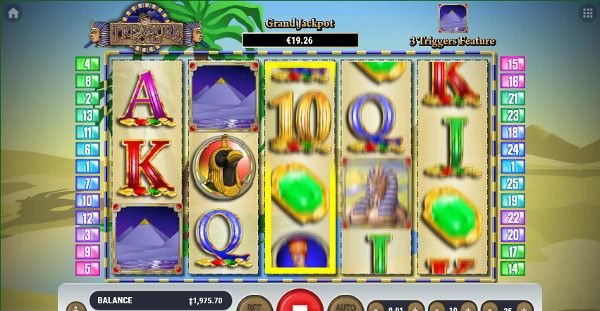 “In Egypt, there is a saying: When good fortune looks down upon us, it does so in threes, one for each part of the Eye of Horus” this quote by Nefertiti, Queen of the Nile could not be more true for this Ancient Egypt themed slot by Habanero as there are three features to win good fortune. Habanero have travelled to Egypt and have tastefully depicted the ancient land of Pyramids, Mummies, Pharaohs, Queens and Egyptian Gods in this video slot. Expect to roam the desert and find an oasis of treasure hidden in the loved and feared tombs and pyramids of the sacred Pharaohs. Be aware of coming face-to-face with a mummy as you will see its wild side but meeting the Pharaoh and Nefertiti herself, will award you with their generosity. Along the way you will learn about ancient symbols and gods and will be left in awe with the treasures of Egypt hidden within the fortified walls of tombs. So brace yourself for a trip to Ancient Egypt where wealth is the order of the day and more than one jackpot could choose you as their new ruler.

Reel in the Tomb’s Treasure

Your expedition begins on a 6×3 reel and 25 payline platform with volatility set at low level. Combinations of the same symbols on any of the 25 paylines are paid, you can expect frequent smaller wins due to the low volatility. To help you find the elusive treasure hidden in the tombs are a paid Mummy Wild and paid Pyramid Scatter that unlocks free spins to aid in your search for Egypt’s riches.

The Ancient Gods of Egypt, Pharaohs and Queens never fail in flaunting their lavish lifestyle. Finding clues to their hidden treasures has ignited the curiosity of archaeologists and explorers for centuries. Treasure Tomb gives us a slight taste of what Egypt has contained in her many Pyramids, tombs and forgotten cities. Habanero has provided wonderful toned down graphics with just the right touch of animation. Digging up the bonus features adds just another level of treasure to make the exploration even more worthwhile.

Where to Play Treasure Tomb