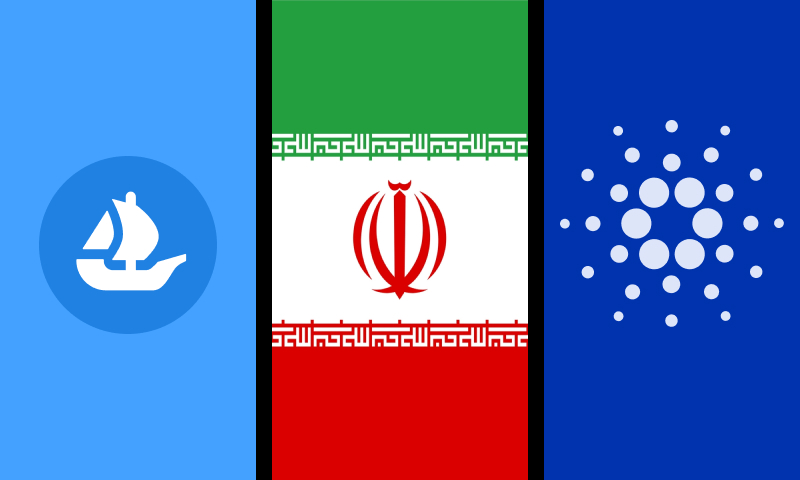 On September 2, Cardano’s founder, Charles Hoskinson, announced that the long-awaited Cardano hard fork, nicknamed ‘Vasil,’ has been scheduled for September 22. This is the third time that the project had been rescheduled, with the first being in June this year. The purpose of this fork is to provide users with greater scalability and lower transaction fees.

On September 1, Iran’s Deputy Minister of Trade, Alireza Peymanpak, announced that Iran would officially accept payment in cryptocurrency for imported goods. This move comes in response to the years-long sanctions that the country has faced by the US since November 2018. The country has been facing US sanctions on and off since 1984 due to their anti-terror wars in the country. This announcement comes three weeks after the country received their first import worth $10 million USD in cryptocurrency.

OpenSea Will Not Support New Ethereum Chain After Fork

On September 1, OpenSea announced that it would not be changing its mode of operation and would continue to only support NFTs based on the current Ethereum proof-of-stake (PoS) chain and does not plan on supporting any NFTs that may developed on the new chain that will be formed post-fork. The Ethereum merge is currently planned for mid-September and has been the subject of much debate among the Ethereum community, since it would negatively affect many of the dApps that are based on the old chain. However, its new Mainnet protocol is also intended to speed up transaction times while also reducing transaction fees.

One August 31, the Thodex cryptocurrency exchange CEO founder, Faruk Fatih Özer, who ran off with $2 billion USD worth of cryptocurrency was caught in Vlorë, Albania thanks to the combined efforts of Interpol and the Albanian police force. The scam artist who founded Turkey’s largest cryptocurrency exchange platform fled the country with his clients’ funds in April 2021 and has been on the run ever since. He has since been extradited to Turkey and faces charges that could sentence him and the platform’s other founders and executive members to up to 40,564 year a piece.

On August 30, Crypto.com won a court case against an Australian woman who was refunded $10 million USD instead of the $100 USD she had originally claimed in May 2021. She then happily used the money to purchase a mansion for herself and her sister. However, seven months later the cryptocurrency exchange platform finally noticed the error during their end-of-year audit and sought to reclaim the money sent in error. The women refused and were taken to court where the judge ordered them to sell their mansion and repay the money.

On August 29, Check Point Research discovered a malware program presenting itself as a Goggle Translate app that was actually secretly installing a mining program called ‘NitroKid’ to use the computing power of over 112,000 PC users to mine Monero (XMR) for them. This free software originates from Turkey and can easily be found through Google searches and as such will be trusted by unsuspecting victims.