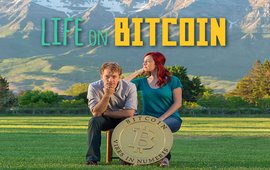 Have you ever wondered what it would be like to live your life entirely on Bitcoin? There have been a few who tried it for several days or even endured for a few weeks, but that was the most they could handle. How about doing it for 3 months?

We’ve already seen one Bitcoin documentary – The Rise and Rise of Bitcoin – explain what exactly Bitcoin is and the main people behind, but this new film is a much more personal experience. In the upcoming documentary ‘Life on Bitcoin’, one couple will attempt to live entirely on Bitcoin for a full 90 days. Beccy Bingham and Austin Craig got married, went on their honeymoon and then tried to pay for everything in their lives using the cryptocurrency. Cell phone bills, groceries, gas, electricity – you name it, they want to pay for it in Bitcoins.

The official trailer for the documentary was released yesterday and it looks pretty exciting – even if it is a bit disheartening at times as well. Have a look:

If anything this experiment is going to make for some very exciting viewing, and will certainly leave us with a lot of questions. Will they make it? Do random stores and people in America actually know about Bitcoin? What life essentials are still lacking Bitcoin integration? Where did they unexpectedly succeed?

The project was originally funded through Kickstarter, and has been in the works for nearly three years. Finally with the release of the trailer we know that screenings will be taking place this summer and we can find out what life on Bitcoin is really like.

For more, see our list of the best Bitcoin documentaries.