WeTrust Interview: Blockchain And The Future Of Insurance 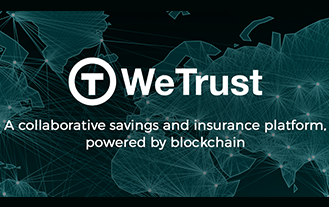 Changing the future of insurance, and some other functions that financial institutions carry out is plausible. WeTrust provides a sound alternative to the traditional ‘trusted third party system’. Their idea is quite simple, and Ethereum enabled smart contracts provide the tool for WeTrust to attempt to disrupt the industry. Ultimately, if this initiative succeeds, it could provide benefits to millions of people around the world.

Bitcoin Chaser: WeTrust attempts to tackle a problem that is at the core of the world’s financial infrastructure, how did you decide that this is a project you would like to take on?

We Trust: The financial industry today is dominated by large five-hundred pound gorillas that have not seen disruption for over a century. Large institutions through their immense scale and impenetrable network effects have made it impossible for smaller firms to compete. In fact, these highly centralized and hierarchical organizations have even lobbied for favorable regulation tipping the playing field to their advantage. It is no surprise that any opposition that stands in their way is obliterated before they can reach efficiencies of scale.

Yet despite the prevalence of these large institutions, 2 billion adults are unbanked in this world! Financial Inclusion is a passion of ours and after brainstorming and research, we developed our vision, which is to leverage social capital and trust networks and create an alternative savings and insurance platform. Our mission is to address the challenges faced due to lack of financial inclusion, and lack of competitive alternatives to existing financial products.

ROSCA, or Rotating Savings and Credit Association — is our first product. ROSCAs consist of a group of trusted associates who agree to a fixed contribution of money every fixed period of time with an agreed upon framework on how the funds will be distributed to participants (e.g., $10 per month, and distribution is based on bidding). This savings program is used by >1 Billion people around the world, many of whom are unbanked/ under-banked.

More about WeTrust and their ROSCA System

Our app will allow anyone to create / join a ROSCA group, create the terms (amount of money per period, period length). Depending on platform usage, future products will include a credit scoring system, mutual insurance, and lending.

Times are indeed changing and with the advent of Blockchain technology, smart contracts and immutable record keeping many industries are ripe for disruption and innovation. Banking now has the potential to go digital without the need for a “trusted third party” which enables users to side-step the traditional financial system. We foresee that blockchain technology will impact the financial sectors in the following core areas:

BC: Basically you want to scale ROSCA up, but by using Ethereum – which is a perfectly logical choice – you now have a new problem: cryptocurrencies and blockchains are still science fiction to 99% of the world’s population. How will you tackle this problem in order to scale?

WT: I completely agree with you. Crypto-currencies and blockchains are still science fiction in most of the world. Our plan is to pilot our idea within the crypto-community first; however, as Stablecoins become available, we will integrate those into the platform. This will allow users who are familiar with purely fiat currencies join our platform without worrying about price fluctuations. Our vision of the future has blockchains running in the background and will not require users to have knowledge about blockchain or cryptocurrency – similar to how current users of Google, Netflix, etc. They do not need to understand the underpinnings of the internet infrastructure.

BC: You accurately describe part of the problem there is with traditional insurance companies, namely that they invest the money they get from customers in the stock exchange, which is risky. Nevertheless, the proceeds from those investments also serve to cover costs for insurance claims. Are you also going to invest the money from payments to create liquidity to cover for claims? How are you going to make sure that there is enough money to cover insurance claims?

WT: Our platform will not invest the money from the contributions. All contributions are kept on the Blockchain – safe and secure and only disbursed via the reverse auction. In the future, there will be the potential to add more complex methods to disburse the funds, but for now, a reverse auction will be the only mechanism WeTrust will support. Until we incorporate usage of re-insurance, insurance claims will be limited to the pot size. Having said that, we need to first take stock of the current state of affairs in the insurance industry, understand where current insurance premiums are spent. This will help us understand how we are different from the status quo. Here is a typical cost breakdown for an above average performing property casualty insurance company:

BC: Ethereum has had its own set of issues since the DAO attack. What is your opinion about the hard fork following that attack?

WT: We believe the hard fork following the attack and whether or not it was the correct thing to do is an ideological argument. We support of the hard fork because no code is perfect and at the end of day, we prefer Ethereum fork itself to reach the ultimate Blockchain virtual machine.

BC: Which other product will WeTrust provide in the future? Will it become a platform for pensions as well?

WT: According to our roadmap, we are focusing on the basic ROSCA amongst your close friends and family first. After this, we will implement a credit scoring algorithm and grade participants based on their adherence to their promises. A robust credit scoring algorithm will allow basic ROSCAs to scale and merge with ROSCAs that have common connections/ trust circles. As we grow out this initial use case, enterprises or small businesses CAN choose to run a pension circle on this platform. The only variables that might change to make this use case a reality are the number of participants and the rules that govern disbursements/ fund managements. This probably a year away, but definitely a feature we can implement if the community would like us to.

BC: How will you structure your Trust Coins [Token Sale]?

WT: 100M Tokens will be issued on the Ethereum Blockchain, 10M will be kept for the team, 10M reserved for future expenses, and 80M sold to crowd sale participants. The crowd sale will run for ~4 weeks and at the end of the sale, the coins will be divided amongst the participants. We will accept Bitcoin and other crypto-currencies via Shapeshift.

BC: How many ROSCAs are you aiming to organize within the first year of your launch, and how many members do you aim to have per ROSCA?

WT: Each ROSCA represents 10-15, but varies by region. Within the first year, we aim to build partnerships that will see our product being used within both formal and informal ROSCA groups. We will first focus on regions that are already familiar with ROSCAs, and it would not be inconceivable for us to onboard millions of users if our product can achieve viral growth. By continually working with our users and improving the experience (e.g. integrating Stablecoins, establishing offices in India, China, and Latin America) we can achieve viral growth.

BC: How will the P2P lending platform work? Will you be asking borrowers to put assets up as collateral for their loans?

WT: The P2P lending platform will be one of our later features namely because of the number of moving pieces that must be in place before it will be feasible. P2P lending will work, but will face some challenges especially with bad actors and defaults. P2P lending has thus far been unable to live up to its promise around the globe due to the lack of deterrents which WeTrust will have make available for users prior to launch:

BC: Do you think that big corporate players might be able to co-opt your idea and beat you at your own game?

WT: At the end of the day, we envision a system where financial services have aligned interests with the user/ policyholder, and essential financial products are provided at a fair price to users and policyholders. We are building WeTrust to solve this problem, and if institutions are inspired by our mission, so much the better, and we would be open for collaboration opportunities.

If there is a competition to address the challenges stemming from lack of financial inclusion, we believe the more the merrier — this is a space that represents an opportunity and demands more attention.