Win BTC with the Greatest Presidential Battle of All: BC.Game’s TB Battle 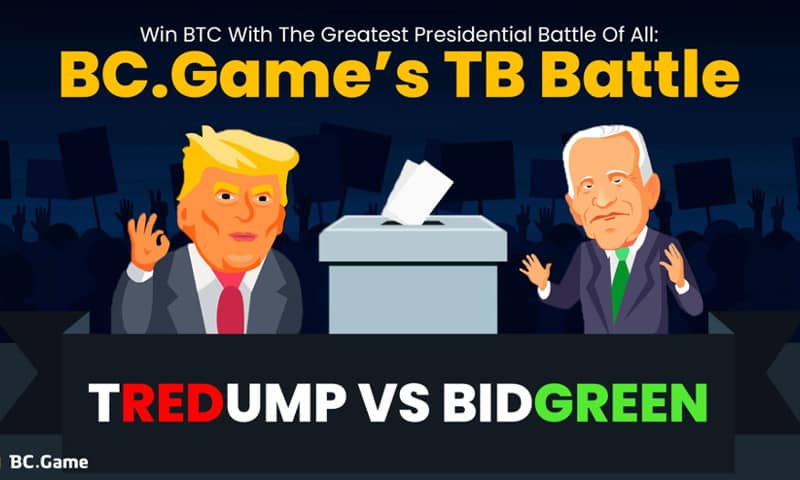 We’re ramping up the hype and making the US Election a little more exciting! Instead of casting your vote with BC.Game, your bets are going to do the voting for you in this legendary TB Battle. What’s better than your party winning the election, winning BTC obviously! Play to cast your votes for either the Tredump side or the Bidgreen side. Ready to change history?

To enter our BC.Game TB Battle, you’ll need to be a registered player. Every time you wager in the Crash red and green game (trenball game), you’ll receive Tredump coins (T coins) for betting on red and Bidgreen coins (B coins) for betting on green. At the end of each week, and the competition, we’ll have prizes for the players with the most coins on either side!

Players will need to make bets in the Crash (trenball game)

There are plenty more ways to earn extra points (see below) so be sure to accumulate as many as you can each day. Our Weekly Prize Pool and Total Prize Pool depend on players’ weekly wagers during the TB Battle event so the more players bet, the bigger it grows. And the more coins you have, the higher your chances of winning your share of over 12 BTC.

At the end of each week, the Top 10 Highest T Coin and B Coin holders (total of 20 players) will be awarded the Weekly Prize Pool. Every Monday at 03:00 (UTC+0) the previous week’s ranking rewards will be distributed and can be claimed at the Notice page.

The final Total Prize Pool announcement is scheduled tentatively for November 3rd at 03:00 (UTC +0) after the final result of 2020 United States presidential election is announced. The top 50 highest T Coin or B Coin holders (total of 50 people) will split up the Total Prize Pool (the total wagers made during the TB Battle event). Depending on the final election result, if Biden wins then the B Coin holding team will win (the system will automatically rank the top 50 winners) and the same for the T Coin holding team if Trump wins!

Please Note: Fake/multi accounts activated for the sake of this contest will not be considered in the final tally. BC.Game reserves all rights and the managements’ decision will be final.

How To Earn Extra Points

Get ready to enter the most exciting TB Battle in history! Whose team will you be on? Cast your votes in green or red and let’s see who comes out on top! All you need to do is rank in the Weekly PRize Pool or Total Prize Pool to get your hands on the BTC.