Is Biometric Tech the Future of Bitcoin? 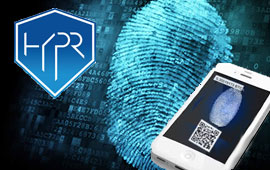 Bitcoin is pretty futuristic. It’s digital money on the internet! But you know what’s even cooler and possibly more sci-fi than Bitcoin? Biometric things. Yes I’m aware that biometric technology has existed for many years, but it just gets me every time. I mean you’re using your DNA to do something digital. It’s super cool, don’t try to deny it.

So that’s why the notion of a marriage between Bitcoin and biometric technology has me pretty darn excited. Thanks to super cool biometric tech company HYPR Corp., Bitcoin wallets will soon have biometric capabilities as an added security feature.

Let’s just talk about HYPR for a second, it’s a pretty cool company. First of all, I don’t know about you, but I’m not aware of many tech companies that post amazing memes on their Instagram account. For that matter, how many biometric security companies actually have Instagram accounts??

In addition to killing it on social media, HYPR is also taking security very seriously as the biometric data that you use in order to login to your Bitcoin wallet is not stored on a server but rather offline in order to keep things as secure as possible. HYPR allows its users to create and use various forms of biometric data such as facial, fingerprint and voice recognition in order to make you feel like a Mission Impossible character before you buy something with your BTC on CryptoPet.com.
HYPR biometric services are available using both mobile and desktop clients that can be accessed from a variety of devices. The tech that will be integrating with Bitcoin services is known as HYPR SDK, and it is “Currently in development across a number of banks, which are implementing biometric security solutions”, according to HYPR Corp. CEO George Avetisov.
While there are many biometric companies out there, HYPR appears to be embracing the rise of Bitcoin and knows how many Bitcoin adopters will be intrigued by the prospect of an added form of security, especially a biometric one.
Should Bitcoin wallets be making the jump to the added security of biometric logins? Let us know what you think!