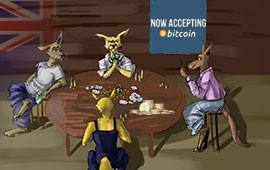 Good news everyone! Bitcoin is officially a currency. No not just a digital currency, but an actual real-life currency that people will start taking seriously! …At least in Australia.

The Australian Taxation Office originally classified Bitcoin as an “intangible asset” back in 2014, but the country’s Senate is looking to change that definition in the hopes of furthering the digital currency market. The move towards a legitimate and global currency will help grow the Bitcoin community within Australia as well as throughout the world.

According to the plan laid out so far in Australia, the country is looking to make Bitcoin just as much a currency as AUD. And why not?

Establishing Bitcoin as an official currency not only benefits the business already accepting Bitcoins by confirming their legitimacy and helping them to develop within the country. Additionally, both Bitcoin merchants specifically and the Australian economy in general will benefit on a global scale once Bitcoin is defined as an official currency. There are millions of Bitcoin users across the world and cryptocompanies are popping up every day. For Australia to be the first country to firmly establish Bitcoin as a currency alongside its own or others such as USD and EUR, the country is telling the world it is welcoming the Bitcoin community with open arms.

Australia is already home to one of the most mainstream Bitcoin companies that I have come across so far: Living Room of Satoshi (which is also a company that will vastly benefit from this). For those of you who aren’t familiar with the company, LRoS allows Australians to pay bills using Bitcoins. Regular, every day bills such as gas and electrical. Having Bitcoin as an official currency will help the company to a) ease newcomers into the fold – aka those who aren’t sure about paying for real bills using digital money, and b) allow it to expand into other countries.

Whether the decision is made final or not, the fact that Australia is taking Bitcoin seriously and realizing its true potential is a major step forward for the currency, for the country, and for commerce as a whole. While other countries like Canada have already taken steps in the same direction, there are a TON of other places that can learn from Australia.