Does Bitcoin Have A Place In Virtual Reality? 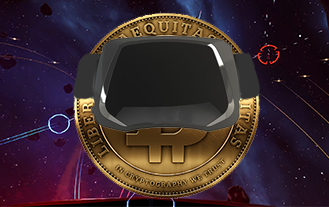 Virtual reality is the future of gaming, and to a large extent it could well become one of the preferred tools of interaction with the world besides the obvious gaming applications. For instance, it can become a powerful tool for P2P interaction at a distance, or a great tool to be used in education. As such, the growth in the virtual reality industry could very well be tied to various cryptocurrencies, but not necessarily to bitcoin, unless the latter can become a more desirable alternative due to its position in the market or its characteristics.

One of the reasons that bitcoin might not garner the strength many would expect it to, in the realm of virtual reality, is precisely because the bitcoin revolution has been giving way to niche cryptocurrencies. The most glaring example of this is the Voxelus initiative and its own cryptocurrency, Voxels – VOX. Voxelus is a kind of virtual reality gaming hub, where everyone can buy games and developers can sell their games or features, or use elements sold there in the development of their games. The currency the users must have in order to complete a transaction within the Voxelus eco-system is Voxels. This is an example of a niche cryptocurrency specifically designed for VR gaming.

According to one of the founding members of Voxelus, Halsey Minor, the development of the cryptocurrency came after the concept for Voxelus was conceived. In an interview for the Daily Decrypt, published on YouTube on April 6th, 2016, Mr. Minor asserts that the development of the cryptocurrency was a logical next step given the nature of gaming. To have an in-game reward system that can be fully taken into the real world through an exchange into bitcoin or even US Dollars, would be a great way of integrating creativity in the development of virtual reality games, or the skill that players develop playing those games, with the outside world. This would effectively allow developers and players to earn a living, or part of it, directly through what they do in the world of gaming.

Markets Trump Voxels Logic and give Bitcoin a Chance

Despite being logical and sensible at least in theory, Voxels has so far disappointed as a cryptocurrency. With a market cap of less than $1 million USD, and value declining in terms of US Dollars almost constantly since it was launched, Voxels may never live up to its original expectations. This might be due to a number of reasons, some of which may give bitcoin a chance to become more dominant in the world of virtual reality than other niche cryptocurrencies.

To uncover the reasons why Voxels might keep on underperforming and why bitcoin has an opportunity to be an important part of the virtual reality industry, it is necessary to analyze Mr. Minor’s arguments from the interview:

Voxels could have also suffered from narrow, highly specific branding that can well exclude it from the wider virtual reality market. This is an aspect in which a cryptocurrency like bitcoin will have an advantage, because it is not as narrowly defined or perceived. In effect, if and when virtual reality takes over some aspects of education and training, a broader cryptocurrency such as bitcoin might be the first choice for many – if service providers are thinking about selling their services for cryptocurrencies at all. For example if a wilderness survival instructor, wishes to use virtual reality to train people in certain outdoor skills like navigation, the instructor might be more willing to take bitcoin than Voxels, precisely because it is more robust. Its image as a cryptocurrency with a broader use will probably play a role in the instructor’s decision making beyond the fact that Voxels might be as convertible as bitcoin.

There is no doubt that the scope of virtual reality gaming and other applications, will encompass a myriad of different payment solutions. In fact the applications of this technology are at least as broad as those that blockchain technology has. This means that there will probably be a place for many different currencies and payment methods in niche markets within the virtual reality industry, as much as there is a market for a plethora of cryptocurrencies due to the development of blockchain technology. This leaves the field wide open for bitcoin to become the leading cryptocurrency within this niche, while it simultaneously gives Voxels believers hope for a greater role in the future. Only the markets will be able to settle the argument, and so far they have not been kind to Voxels, despite the logical thought process upon which this cryptocurrency was created.