Bitcoin and eSports: The Perfect Match 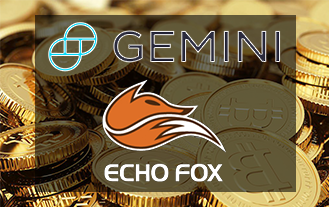 One of the fastest growing industries right now is eSports. Tournaments and events surrounding online gaming have evolved, catching the attention of savvy tech companies that are looking for sponsorship. It was just time until the bitcoin connection emerged, as a highly compatible vehicle to promote bitcoin based businesses during eSporting events, or through eSport teams. Within these emerging partnerships, some have a branding impact that goes well beyond both worlds. Such is the case of Echofox and Gemini.

On the surface the names Echofox and Gemini don’t say a lot about the accolades of the people running the organizations. It takes just one look beyond the headlines to start connecting the stories and understand the potential for success. On one side, Echofox is Rick Fox’s eSports team. Rick Fox had a very successful career as a professional basketball player, and was a prominent figure on LA Lakers teams led by Kobe Bryant and Shaquille O’Neal.

On the other side, the Winklevoss twins – Tyler and Cameron – are the people behind the Gemini bitcoin exchange. Much like Rick Fox, the Winklevoss twins had an athletic career before they branched out into bitcoin and other high tech endeavors. Both twins were rowers and made it into the US Olympic team for the 2008 Beijing Olympic.

Athleticism and Competitive Fire with a Knack for Business

Beyond the huge potential of combining eSports with bitcoin, getting these 3 highly competitive ex-athletes who have also succeeded in business together, has great winning potential. This potential will not only shine through in Echofox’s performance or in Gemini’s business success, it will also open a great opportunity for further inclusion of bitcoin in eSports.

Rick Fox recognized this potential. In a media statement on July 12th, the ex-Laker said “With the rapid increase in the number of popular international events and athletes coming from every corner of world, the borderless nature of bitcoin makes it a promising candidate to become the de facto standard for payments across all aspects of eSports.”

The Winklevoss twins agree. On the same media statement, Tyler asserted his position vis-à-vis the partnership in particular, and the role that cryptocurrencies will play in eSports in the future: “Digital currencies have tremendous potential to reshape the financial system and our exchange is especially well positioned to create a safe ecosystem for frictionless money transfer within eSports. Due to a general familiarity with cryptocurrencies, the gaming community is a natural place to cultivate understanding and trust as we work to introduce the benefits of digital assets to a broader, more mainstream market.”

Echofox and Gemini Score a Double-Double

This partnership will surely give the Echofox team a great edge in eSports tournaments, as well as a huge opportunity for Gemini to market itself to a niche market with huge potential. It will also give the eSports industry a great template on how to forge partnerships across industries with its most natural allies, beyond hardware and computer equipment makers.