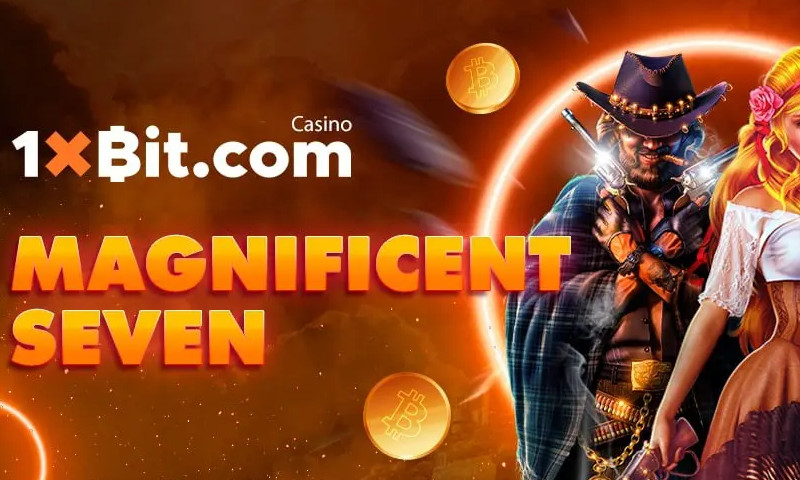 1xBit Casino has officially introduced their latest slot tournament. Magnificent Seven. Players are whisked away on a Wild West adventure, with prize funds of up to 500mBTC and 1500 free spins. The slots take users off into the world of the Wild Wild West, complete with kooky characters and desert towns.

What You Can Win

As part of the Magnificent Seven tournament, players can win a huge variety of epic prizes. The tournament has a seriously valuable prize pool, and a prize fund comprised of:

This tournament is based on the 1960 film of the same name – with a slot game that is based on the adventures of 7 brave cowboys, who head into the Wild West to hunt down a man who’s taken over the town.

To take part in this tournament, 1xBit players must play slots from top game providers such as Spinomenal, Endorphina, Betsoft, ELK, Booongom, iSoftBet, and Pragmatic Play. These providers have released top slots such as Aztec Gold Megaways, John Hunter and the Book of Tut, and Nights of Egypt.

1xBit is a premier crypto gambling destination, complete with a huge variety of epic slots, table games, and more, and 25 cryptocurrency payment options. New players will score a welcome package bonus of up to 7 BTC, over their first four deposits made on the platform.

Having launched in 2015, 1xBit casino has been a major name in the crypto gambling industry for years. Players can play in a variety of digital assets, including Bitcoin, Bitcoin Cash, BitShares, Bytecoin, Dash, DigiByte, Dogecoin, Ethereum, Ethereum Classic, GameCredits, Litecoin, Monero, NEM, Sibcoin, and Zcash.

The platform has a seemingly endless range of epic casino games, from top game providers like Spinomenal, Endorphina, Betsoft, ELK, Booongom, iSoftBet, and Pragmatic Play. The first deposit bonus is a major draw for new players, as they can score 100% up to 1 BTC with their initial payment at 1xBit casino.