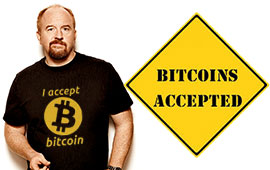 Nearly every day I write articles about a new company / medium / thing that accepts Bitcoin, but today we’ve moved from nouns to proper nouns with the latest breaking Bitcoin news. Brace yourselves, this is a wild one.

That’s right, when you visit Louis’ site to buy audio from his previous shows, and presumably tickets to upcoming shows when he has more on tap, you can pay with Bitcoin using Bitpay’s payment service.

If you’re not familiar with Louis CK he’s a comedian who also stars in a TV show called Louis. His comedy is definitely not NSFW but it’s amazing and I’m a huge fan (in case you didn’t realize by now). It’s definitely a good decision on his part because it opens up his merchandise to a whole other world of payment possibilities. And let’s be honest, in 2015 who is purchasing audio of comedy shows? Not me, but for $5 worth of BTC just to applaud the fact that he is accepting cryptocurrency – I might just do it. Four Louis’ sake, of course.