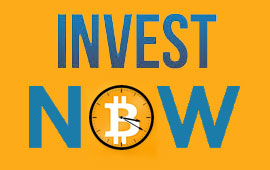 Let’s step into our time machine and travel back to 1994 – a simple time, where many people out there hadn’t even heard of the internet. There were however many who were aware of its existence and began investing in what they believed was the key to the future. Then the dot com boom happened and, well, the rest is history. Obviously hindsight is 20/20 but just imagine having invested in Google back then. Sigh…

More than 20 years later, we’re at a similar crossroads when it comes to Bitcoin, but it seems that people aren’t inclined to repeat the mistakes of the past. Recent research has shown that Bitcoin is currently growing 25% faster than the internet did during its early stages (which many argue Bitcoin is still in) and the overall investment for Bitcoin entities is expected to exceed $800 million this year alone.

Further data from sites such as CoinDesk.com predict that the investment in the cryptocurrency will double each year from 2014 onward. DOUBLE.

Bitcoin is really gaining traction as an investment these days for several reasons. First, many more people are believing in it than ever before. Also, it’s important to note that I didn’t say that people are jumping on the Bitcoin bandwagon or train – it’s not just about the hype. People are legitimately beginning to understand Bitcoin and its capabilities. Those people and others that they spread the gospel to are at the forefront of Bitcoin investments.

Secondly, Bitcoin is becoming more than just a currency, but rather a tool for creation and innovation. The blockchain technology can be utilized for countless different businesses and people are realizing the power behind it. Bitcoin-based startups have exploded recently and the investment numbers are proof of that.

The real question for you is what stage of Bitcoin adoption you’re currently in. Are you a believer or a backer? Will you be among the people investing nearly 1 billion dollars in Bitcoin in the coming year? If you have the means, it might be one of the best decisions of your life. Just think back to 1994 and see what could have been then.