Bitcoin and Space Travel Lead Startup Investment Into the Future 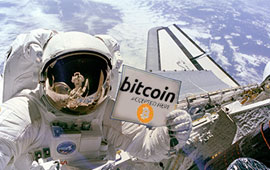 If you think that Bitcoin believers have their head in the stars, you might not be too far off. A recent study into venture capitalism has shown that Bitcoin and space travel are two of the fastest growing business areas for investment, with the former topping the list.

According to the data report from Tomasz Tunguz, Bitcoin has grown an incredible 151% since 2012 in terms of investments made towards industry startups, putting it just ahead of photo sharing and physical storage. Space travel is currently sitting in the fourth position with a 141% growth increase over the past three years.

It makes sense too. Bitcoin and space travel are very similar in that they both represent a forward-thinking approach and embracing futuristic ideals such as digital currency and life beyond our planet. They are also two verticals that are heavily criticized by those opposing their growth for various reasons. Industries such as photo sharing and hospitality – aka AirBNB – are born out of necessity of the market, whereas Bitcoin and space travel are backed by visions for a future that isn’t limited by today’s boundaries.

I’m certain that many people have thought about traveling to the Moon or beyond, but let’s be honest – the average Joe isn’t the next customer in line for a seat on Air NASA. Same thing with Bitcoin: when asked about the cryptocurrency, the average person will generally shrug their shoulders and ask if that’s the online drug money. People don’t generally become involved with things they don’t understand – despite the allure of such notions. Of course I want to orbit the Earth, but I don’t know the first thing about space flight. So I’ll just stick to investing in the next Instagram.

Considering the growth rate of both these industries, it’s difficult to imagine that they will be slowing down any time soon. And considering just how many travel sites are now including Bitcoin as a payment method, it’s only a matter of time until you can buy spaceship tickets to the moon using a few of your coins. Both the universe and cryptocurrencies don’t seem to be going anywhere any time soon, so if you take away anything from this data report it’s that if you’re not investing in either of them, you could be stuck in the past. I say, to Bitcoin and beyond!