Bitcoins on Wheels and Their Potential 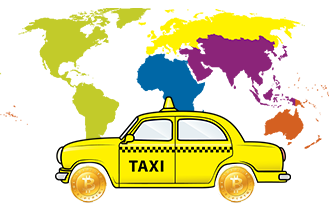 Fierce competition between traditional taxi companies around the world and the rule breakers from the sharing economy – Uber, Lyft and others – requires both sides to take advantage of every tool they can. Many taxi companies around the world have been eager to widen the payment methods available to their customers. Some of these taxi companies have been adopting bitcoin payments, probably in order to adapt to a quickly changing world, in which the services they render are under threat from emerging multinational corporations that offer other advantages they cannot. The adoption of bitcoin by taxi companies worldwide, is positive and shows the importance of the mother of all cryptocurrencies. However, it may not be enough to save these companies from the competition, unless the adoption of bitcoin is coupled with other strategic actions.

Budapest Taxi is the latest taxi company to adopt bitcoin payments, in this continuous struggle to keep market relevance. So far however, neither Uber nor Lyft have followed suit. On the payment sections on their official websites, both companies list all the payment methods that they accept, and bitcoin is conspicuously absent. It seems that no matter how many taxi companies join the Bitcoin revolution, the multinational mobile ride hail companies are not interested at all.

The reason that companies like Uber and Lyft might be shying away from bitcoin, has to do with their business model. In most places, Uber and Lyft services are more expensive than regular taxi rides. This is because they offer a service that is perceived to be more exclusive and of a higher quality. This service might appeal more to frequent out of town travelers, who know they can get the same service wherever they go and use the same app to pay for it.

It is easier to convince these users to buy pre-paid rides or to use their digital wallet which can be loaded in their currency of choice, than to persuade them to use a whole different currency that does not resemble fiat at all. This means that the potential of adding customers from a pool of a few million bitcoin users would yield a marginal gain at most for the likes of Uber and Lyft.

Going Beyond Bitcoin Could Save Cab Drivers Nonetheless

In order to survive this fierce competition, taxi companies should stop trying to fight Uber and Lyft on the grounds of regulation, while they open up to unregulated payment methods. They should instead take the use of bitcoin to the next level. The real advantage that they could offer that Uber, Lyft and the others cannot provide, is a cheaper ride. The adoption of bitcoin in itself is only a small advantage at most, but if these companies could form some kind of inter-regional or even international association to institute pay sharing networks, they could change the game.

These networks would allow the lower budget travelers to buy their ride before they arrive to their destination. The basis for such a network can be bitcoin itself. In theory, if all these taxi companies already decided to invest their trust in a decentralized payment method that is not regulated, taking it to the next level should not be too complicated. It could even give customers added value, through knowledge of fees in advance.

Taking it a Step Further

A common payment network in the form of bitcoin, coupled with a pre-paid system through a taxi company alliance, should be the starting point. The model can be enhanced through loyalty points, managed through blockchain technology, and even ride sharing apps that will enable customers to split their rides with other customers.

These changes could even serve to harmonize taxi ride standards in many places, which will also benefit the customers. However, in order to achieve this, taxi companies will have to walk into the age of technology, instead of merely adopting some of its advancements. They will also need to look beyond their local markets and start thinking like multinational corporations. Until then, bitcoins on wheels will not provide enough boost to save them from the likes of Uber and Lyft.