Bitcoin Op-ed: Get Over the Uber Rumor 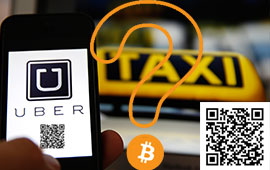 Within the Bitcoin community it’s always exciting to see new companies integrating Bitcoin payments into their software. It’s really fun when these companies are hot new startups that have taken the world by storm. That’s why when rumors hit the internet last night of a new Bitcoin integration for the wildly popular rent-a-driver app Uber many people were jumping for joy. This was a new opportunity for expansion of Uber’s payment option as well as the possibility of a more seamless and digital method for interacting with the drivers.

However, the rumors were denied by Uber – rather quickly – and hopes were dashed.

This is hardly the first time that rumors spread about Bitcoin integration for a popular company, but to have the rumor squashed so quickly is definitely a bummer. It’s also a bit telling about Uber that within hours there were already articles published of the company’s negative response. What does that say about Uber? What does it say about how we, the Bitcoin community, are pretty upset about this new chance being squashed like a fly?

I think the feeling might have come as a result of Bitcoin users always swinging for the fences (that’s a baseball reference for all you cryptonerds out there). Every time a new company that we’ve actually heard of (bonus points for one we use) looks to adopt Bitcoin we jump for joy and assume it’s going to be the next big crypto thing. However, the fault that lies within this optimistic excitement is precisely the polar opposite of the rash pessimism offered up by all the Bitcoin detractors. “What was that? Bitcoin is down $3? Yup it’s dead.” Sounds ridiculous right? Well, I hate to break it to you but it goes both ways.

Take Movietickets.com for example. We wrote a piece about them recently adopting Bitcoin as a payment option for more than 900 theatres across the US. Are they making millions and rolling in figurative Bitcoins like Scrooge McDuck? Nope, but that doesn’t mean they’re not excited about what they’ve accomplished. They’re looking at the Bitcoin long game, and while it’s not entirely overtaking their company sales, they have seen “several hundred” Bitcoin sales in just a few short weeks – and those numbers are only growing.

I’ve seen several comments on posts about the Uber response and there’s a lot of chatter about how dumb Uber is being for not adopting Bitcoin; how they totally should go ahead with it because it will make their platform so much better. Well, folks, these things take time. Who knew what Uber was last year? Who even used it 6 months ago? We don’t know what Bitcoin adoption will mean for such a company, but if it’s not the right time, then the company is likely to strike out on an integration it doesn’t fully embrace.

If there’s one thing I’ve learned about Bitcoin from working on it every day and taking on a personal mission of converting the masses to the cryptogospel it’s that Bitcoin is ALL about the long game. We have until the year 2196 until we run out so we might as well take baby steps, right?

So what if Uber didn’t adopt Bitcoin – just the fact that rumors about its integration should be cause for celebration in the Bitcommunity. Seems to me like that’s more of an indication of becoming mainstream than a random driver wanting to scan your QR code. So sit back and relax and wait for the real integrations to come. Until then, let’s focus on the tangible side of Bitcoin – like the road to $300. That would be a lot more fun.