Bitcoin on the Rise 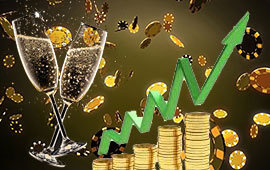 Bitcoin is on the rise! …in case you didn’t notice

The Bitcoin price officially hit $280 over the past 24 hours, and while it is currently hovering around the $267 mark, it’s pretty clear that Bitcoin is getting stronger every day.

The price has had its ups and downs recently, but as the graph shows it has been rising for the past month and doesn’t seem to be slowing down. A few weeks back we put up a poll to our readers about whether people thought the Bitcoin price would increase or decrease following a lull – something that has historically produced an increase. The votes were close, but many believed the price would go up. Was it optimism or a legitimate trend in the Bitcoin market? Tough to say right now, but the fact remains the same – they were right.

A lot of discussions that I have about Bitcoin include one very definitive statement presented to me about how Bitcoin is too volatile or how it can’t trusted since it is sitting at less than $300 when it was over $1,000 not too long ago. While that is true, it’s tough to use the initial explosion of Bitcoin into the market as litmus test. I think the test really starts about 8-10 months ago and is still a work in progress.

I think a cautious optimism is the approach for Bitcoin’s latest rise. I stress caution because despite the fact that Bitcoin is expanding globally at an incredible rate, it is still ironing out some wrinkles. There is reason for optimism due to the slow and steady climb in price as opposed to an overnight spike in the numbers that won’t last.

Like the contestant on the show, I’m enjoying seeing the price climb, but am wary of it flying off the edge into the unstable zone we saw a few years back. Plus the yodeling is hilarious.

For now, I’d say we should take advantage of the Bitcoin price and help spread the gospel of a changed and mature currency. The days of volatility are behind us and now we’re pushing upwards and onwards.