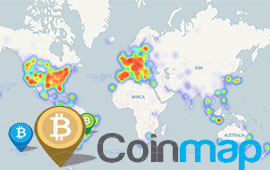 It seems that with every passing day, the global impact of Bitcoins and cryptocurrency grows. Companies that now accept Bitcoin as payment pop up all the time, and as Bitcoin moves into the mainstream, the overall awareness is various new countries is increasing. Sometimes it’s nice to take a step back and admire just how far the space has come, considering how it started several years ago.

In case you were wondering, yes there’s a site for just that. Coinmap.org offers an incredible visual presentation of the growth of Bitcoin around the world. The site offers two main tools, each with its own advantage for getting a better idea of Bitcoins’ takeover.

First and foremost is the World View feature, which is actually really cool. The site provides you with a worldwide heat map, showing the growth of Bitcoin across various countries around the world. There are also country and continent specific views where you can see how Bitcoin has taken over Europe, or expanded within the United States.

Check out this amazing time lapse video of the growth of Bitcoin since its inception:

You can really see just how far Bitcoin has come since the early years, and where it’s the hottest right now. Some major standouts are Israel, as Tel Aviv has become a hotbed for Bitcoin development, and the Canary Islands which appear to be very involved with Bitcoin according to the heat map.

An interesting point is how when looking at a world view, it appears as though the United States is flush with Bitcoin adoption, but after switching to a view of just the country itself, the reality is a much more spread out and sparse adoption. The US is certainly a world leader in Bitcoin, but still has a long way to go as compared with Europe.

The second major feature of the site is the Map View – which is essentially Google Maps with a Bitcoin focus. You can search anywhere in the world and it will point out Bitcoin-friendly locations on the map. There are numbers pointing out how many Bitcoin locations can be found within a given area and as you zoom in, the map points out the locations of each of these Bitcoin merchants.

As Bitcoin popularity increases around the world, we will see more and more merchants accepting Bitcoins and more “cryptocompanies” popping up as well. Coinmap is an excellent resource to locate and connect with Bitcoin companies, and even if you just open it up to look at – it’s fun to see just how much the power of Bitcoin is spreading.