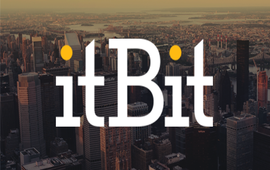 Throughout the roller coaster ride that is Bitcoin’s history, there have been many achievements, milestones reached and of course the tremendous accomplishment of making ‘Bitcoin’ a household word. However, no prior event has vaulted Bitcoin into the mainstream more than the latest accomplishment in the coin’s history.

As of Thursday morning, online Bitcoin exchange itBit received a banking trust charter under New York State law. To put it simply, and according to the slider on itBit’s homepage, the company “is now accepting US customers nationwide” – all completely legally and within the banking parameters of the State of New York. itBit now becomes the first Bitcoin company to receive regulation in a US state, and has set it sights on regulation across all 50.

The news arrives right after another major announcement from itBit that it was closing a funding round after successfully raising $25 million. This new capital, and the major board member hirings that came as a result, coupled with the banking license, is helping to vault itBit into prominence in both the fiat and cryptocurrency banking worlds.

As company CEO Charles Cascarilla put it, “This is a big deal, not just for us, but for the entire Bitcoin industry.”

While the license is currently only within New York State, itBit looks poised to be the first fully regulated Bitcoin exchange across the United States. It’s certainly no secret that New York is the banking center of the country and the license there can only lead to more trust and regulation for itBit specifically, and Bitcoin in general.

Considering major Bitcoin exchanges have experienced hacks, breaches and closures in recent months, itBit is the light at the end of the tunnel in this space. As a result of its regulation, itBit is providing security to its US customers –in terms of encryption, regulation and asset protection as well as overall peace of mind. With the New York State Department of Financial Services regulating the exchange, customers should sleep a little easier knowing their money is in good hands.

In fact, itBit avoided obtaining a “BitLicense” – a regulatory procedure being developed by the superintendent of the New York State Department of Financial Services, Benjamin M. Lawsky. itBit instead acquired the charter (which is much more stringent that the proposed BitLicense) and is the first company to do so since the US financial crisis.

Even though itBit opted to not procure the BitLicense, Mr. Lawsky’s beliefs about the future of cryptocurrency and his motives behind creating the procedure should bode well for the companies following itBit’s lead.

The technology behind Bitcoin and other virtual currencies could ultimately hold real promise, and it is critical that we set up appropriate rules of the road to help safeguard customer funds.

Indeed, we believe that regulation will ultimately be important to the long-term health and development of the virtual currency industry.

Mr. Lawsky said on Thursday in regards to itBit’s regulation.

Whether Bitcoin enthusiasts like it or not, Bitcoin needs to push further towards legitimacy and into the mainstream and itBit has helped push that process ahead several steps. Now it is New York State, next, the US as a whole.