Circle Moves Away From Bitcoin 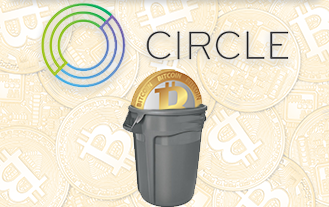 Popular payment app Circle, announced 2 days ago that it will quit bitcoin. The announcement comes as the company expands its reach into Korea and the Philippines with “seamless” transfers from the US, UK and Europe. It seems that the company is focusing on partnerships with local organizations and trying to expand its money transfer services through means other than bitcoin. Nevertheless, Circle is not entirely distancing itself from bitcoin. Instead it forged a partnership with Coinbase to allow customers to buy bitcoin through that exchange.

The Details behind Circle’s decision to quit Bitcoin

Why did Circle quit Bitcoin?

From Circle’s official blog post on the decision to quit bitcoin, it is not possible to determine exactly why it decided to do so. The information in that blog post does assert that Circle remains committed to blockchain technology. Circle will like to encourage the use of blockchain technology as a seamless fund transfer technology, instead of having its customers use it as a speculation tool. Its chat payment system called “Spark” will enable transfer of funds via chat and its back end will enable transfers via blockchains.

Despite the pivot towards a broader blockchain-friendly philosophy, there might be other reasons why the company decided to distance itself from bitcoin. Some internet reports point to the fact that bitcoin is too much of a niche currency for a company like Circle to concentrate on. Even Circle’s blog post itself implies as much. It seems that Circle, like other mainstream companies, would like to take advantage of blockchain while leaving bitcoin aside. However, if bitcoin by any chance becomes hugely popular, the company will be able to jump back onto the bandwagon quickly.

When a company like Circle distances itself from bitcoin, it looks like the mother of all cryptocurrencies was the victim of its own success. It is important to keep in mind however, that no other blockchain project has had the success that bitcoin had in terms of adoption rate and market cap. On the other hand it is important to understand that companies like Circle cannot rely on a network that hasn’t been able to move forward with critical upgrades. Bitcoin is one of the most powerful, cheapest and efficient tools to transfer funds with, but Circle doesn’t seem to think that will last.