Ethereum vs Ethereum Classic: What Will Happen With Both Going Forward? 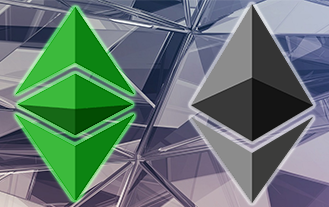 The Ethereum vs Ethereum Classic divide took center stage during the summer of 2016. Many would say that there is a clash between the two networks. The objective truth however, is that both are two different declinations or derivatives of the original Ethereum community. The crack within the original community took place when the DAO attack happened. A hacker decided to attack the smart contract that governed the Decentralized Autonomous Organization – DAO – stealing anywhere between $50 to $60 million USD in Ether, the Ethereum-based digital currency.

At that time, Etherum developers solved the problem with a so-called hard fork, or a change of the Ethereum code. The hard fork reimbursed DAO investors, effectively reversing the attack on the “loophole” of the DAOs smart contract. This lead to a significant difference in opinion between members of the community. Soon, each side created its own version of the Ethereum blockchain. Both versions exist now in parallel, but one of them could potentially disappear in the future.

Ethereum vs Ethereum Classic: what is the main difference?

Ethereum classic is in fact “a continuation of the original Ethereum blockchain – the classic version preserving untampered history; free from external interference and subjective tampering of transactions”. This is how its community describes it. In practice, Ethereum Classic is the blockchain on which all the token holders have lost their Ether and now hold Classic Ether. The Ethereum blockchain is the one in which all the token holders have been refunded after the DAO incident.

Can they both survive at the same time?

It has been ten months since the hard fork took place and cryptocurrency followers are wondering if both blockchains can survive side by side. In other words, some people are asking themselves whether the proverbial ‘cryptocurrency village’ is too small for both. We set out to answer this question, keeping in mind that we might not get an absolute answer, and that the answers we may come up with may be heavily based on certain assumptions. To answer our question, we decided to ask 3 different experts in Italy for their opinion.

Experts Chime in on the Survival of Ethereum and Ethereum Classic

For Federico Tenga of the Blockchain Education Network Italia (BEN): “Classic – that actually cannot be defined as the original chain – must differentiate itself more and more from Ethereum, as new users will be little affected by DAO bailout. I mean, the day when ETH will start using the PoS and ETC will remain with the PoW, the second one will attract more users who want to continue to have the PoW”.

According to Giacomo Zucco of the Italian BlockchainLab, the real question is which of the two communities will get tired first: “I think anyone who is into Classic will realize that what he wants (immutability, PoW, deflationary monetary policy, off-chain contracts scalability) is Bitcoin, while those into the Ethereum Bailout Edition will realize that what they want (changeability and reversibility of contracts that you don’t like, full harmony with the world of financial incumbents and regulators, inflationary monetary policies, consensus models based on shares) is a beautiful platform of open source banking API, similar to PSD2”.

According to Mirco Romanato of Rischio Calcolato, the real matter is which of the two groups will “steal” users from the other: “Both technologies can survive at the same time, but they will specialize in different areas. Their monetary policy is different. Classic decided to have a fixed number of coins, while Ethereum wants to have continuous inflation until it will move to PoS. Also, we have to consider that the strength of Classic is the immutability of its blockchain”.

There is no conclusive answer to the question of whether both can survive. In the meantime, we can only know what the markets are signaling. In this sense, support for Classic yielded an economy that amounts to about 7% or 8% of the size of Ethereum in terms of market cap. From the perspective of investors, ETH seems to be a more attractive asset. While this doesn’t mean that Classic will disappear, it does mean that it is currently the project that needs to work the hardest to strengthen it foundations for further growth.