Bitcoin Bulls vs Bitcoin Bears In The BIP148 Arena 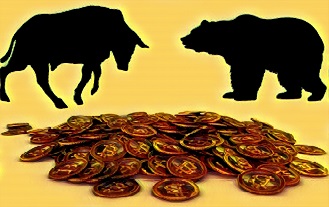 The clock is ticking slowly towards August 1st, the BIP148 activation deadline. Bitcoin prices are moving along with the ticking clock. Their direction looks bearish right now, which is understandable. Uncertainty, not the bears themselves, are the main enemy of the bulls in the BIP148 arena. The wide variety of plausible outcomes during this period leading to August 1st should force undecided investors into one of the camps quickly. The bitcoin bulls vs bitcoin bears battle is unfolding right now before our eyes, based on data and varying opinions of what will happen in just 22 days.

Are you a Bull or are you a Bear?

Regardless of what may or may not happen with BIP148, every investor and stakeholder must decide how much risk they are willing to expose themselves to. Deciding which camp any given stakeholder is on in the bitcoin bulls vs bitcoin bears battle, depends less on the possible outcomes themselves and more on how they feel about them. For each possible scenario, every investor will have a different position based on their own financial situation.

To illustrate this, let’s assume Jimmy Song’s “Users Have Minimal Hash Rate” scenario, in which the UASF garners up to 13% of existing hash rate on July 31st. In this scenario, difficulty re-targeting takes too long, putting SegWit activation at risk and ultimately making the fork pointless. This scenario assumes that there will be one new block every 80 minutes, and there will be a huge transaction backlog. This puts downward pressures on bitcoin prices.

Regardless of where any given investor stands on the scaling debate, he or she might decide that this is just a bump in the road. That would put this hypothetical investor within the camp of the bitcoin bulls given the scenario above; they will continue to hold bitcoin going into August 1st and beyond. Bitcoin bears on the contrary, might get spooked by this scenario, and will probably focus on the fact that their funds will be trapped for a considerable amount of time after August 1st due to post UASF transaction issues. Bears are more likely to start pulling out of bitcoin now and start hedging, whether they support BIP148 or not.

As the clock keeps on ticking, more investors will start choosing sides. Even with bitcoin prices heading down – a possible bearish indicator – there is hardly any other indicator that can serve to determine the outcome of the bitcoin bulls vs bitcoin bears battle. This is mainly because we cannot see a clear movement of funds out of bitcoin and into other cryptocurrencies at this point. On the contrary, it seems that every time bitcoin prices fall lately, so do the prices of every other altcoin. That means analysts cannot confirm whether bitcoin prices are falling due to the risks ahead or just because there is a market correction.

The only indicator left to follow in the bitcoin bulls vs bitcoin bears saga, is technical analysis on bitcoin prices themselves. These technical analyses have proven to be unreliable in the past. Nevertheless, it is possible to take one of the most recent ones and take the support price as the indicator, like Tuur Demeester did a few days ago. If current price is above support, then the market is bullish. If price falls below that support line, then the market is bearish.

That might seem too trivial to use as the center piece of an investment strategy. That is why each investor must understand their own goals and behavioral inclinations vis-à-vis every BIP148 scenario given those goals. The sooner investors figure that out, the better they will be able to position themselves to weather the storm according to the side they pick in the bitcoin bulls vs bitcoin bears divide. After all, the clock keeps on ticking, and if prices keep on coming down, triggering stop-loss orders or panic selling, the ultimate winners will be those investors who already have a proactive plan instead of a reactive one.