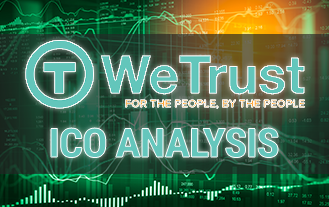 All the final details are ready for the long awaited WeTrust ICO. This project aims to make insurance as well as other financial services completely based on small groups of people – or ROSCAs – by eliminating the need for a trusted third party. WeTrust is an Ethereum based project that will replace the need of a trusted third party through the use of smart contracts. A unique system of association between trusted parties will contribute a fixed amount of money to a fund on a regular basis to support the other members of their association according to the agreed upon stipulations of these smart contracts.

ICO Rating: B (Not based on financial risk. The grade scale goes from A+ to C-)

WeTrust has a solid idea that could prove to be successful even if it doesn’t gain scale. There is value in having a small pool of people that any given person knows, providing a safety net for that person under a system governed by smart contracts. Nevertheless, the structure of the weTrust ICO does raise some questions. Our analysts did some basic math regarding the schedule, bonuses and investment threshold above. Those calculations revealed some specifics that investors must take into account before investing.

The first unusual characteristic in the WeTrust ICO has to do with the exchange rate. Since the investment threshold is variable – anywhere between 1,000 and 6,000 BTC – there is no fixed exchange rate. Nevertheless, there is a fixed amount of Trustcoins in circulation. This means that if the WeTrust ICO raises 6,000 BTC on the first day, which is hypothetical, there will not be enough Trustcoins to give investors a bonus. The project could choose to instead give 30% of the investment back to each investor as a bonus should this hypothetical scenario play out, but no one has communicated the project’s intention to do any such thing yet.

The lack of a set exchange rate and a lower and upper threshold mechanism means that the exchange rate will not be known until the end of the WeTrust ICO. The project can only establish an exchange rate after the ICO and after the bonuses are calculated, given that there is a fixed amount of Trustcoins to go around. This means that investors will not get their Trustcoins until the ICO ends, even if they invest on the first day. WeTrust has set up 3 different escrows with people who are legally in charge of keeping investors’ funds until an exchange rate can be calculated at the end of the ICO. This requires a considerable amount of trust from investors in the project. Vlad Zamfir, Jae Kwon, and Joe Urgo will be legally in charge of the escrow keys until the end of the WeTrust ICO.

Bitcoin Chaser has communicated its concerns about the exchange rate, the schedule and the other gaps in the WeTrust ICO. the project manager replied and showed us mathematically with an example, how the bonuses will work out:

The Calculation that Follows

How many Trustcoins will each investor get?

*Bitcoin Chaser is not responsible for any of your investment decisions.