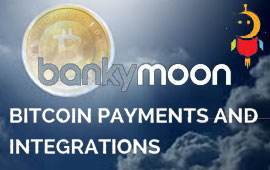 Bankymoon incorporates Bitcoin and the Blockchain into existing companies and non-profit organisations. They develop apps to help enable Bitcoin transactions in a secure and safe way.

Tell us a bit about the name.

Bankymoon: Bankymoon was inspired by the current UN Secretary General Banki Moon. When I first heard his name I loved the sound of it. When trying to come up with a name for the company I realised that I could adapt his name and make it fit the company concept perfectly.

Banky is because it is a Bitcoin payment company. Bitcoin allows one to ‘be their own bank’.
Moon is a Bitcoin meme where all bitcoin believers think that the price will go ‘to the moon’.

What caused you to become a Bitcoin Believer?

Bankymoon: I am a software engineer who has spent many years developing solutions for media and energy companies, banks and other financial institutions. Payments always play a role in these systems and integrating into payment gateways is complicated and has security implications. Also, most Africans don’t have access to banking services and so they are excluded from a large part of the economy simply because they cannot use traditional payment gateways.

I realized early on that Bitcoin is the perfect payment method because 80% of Africans who are unbanked are able to participate in economies that facilitate Bitcoin transactions. I feel that, out of necessity, millions of people in emerging economies will adopt Bitcoin therefore massively increasing its user base.

With Bitcoin starting to become mainstream, which Bitcoin sites do you find yourself spending the most time on?

Bankymoon: I use Blockchain.info as my wallet. BitcoinWisdom.com is a great site for Bitcoin and alt-coin market values. BitcoinMagazine, Coindesk, Bitcoinist and Bitcoinchaser are great sites for Bitcoin-related news and commentary.

Is Bankymoon more geared towards companies or can individuals get involved?

Bankymoon: Bankymoon provides solutions to businesses but we will soon be launching an NGO which allows direct donations for energy to poor schools in Africa. Individuals will be able to make direct payments to fund the utility needs for the schools of their choice.

What are some of the opportunities for Bankymoon in the near future?

Bankymoon: Bankymoon is a company which feels that, in the words of Google, that it is not enough to “don’t be evil”. We want to adopt as our motto “do good”. We want to, first and foremost, be a company that provides positive social benefits to as many needy people as possible and then think about how we can be successful capitalists.

How has the Bitcoin landscape changed since you first got involved?

Bankymoon: I first became involved in Bitcoin in June 2011 after reading the Gawker expose on Silk Road. Bitcoin was less than $1. There were no Bitcoin-related news sites, no merchants accepting it and no wallet providers. It is exciting to see how far we have come.

Where do you see Bitcoin in 5 years from now?

Bankymoon: Bitcoin will be an accepted payment mechanism for most merchants. There will be many large service providers utilizing the Blockchain in interesting ways. With global economies about to enter a deep and long-lasting depression and fiat currencies all about to implode the price of Bitcoin will probably be at least $5000 a coin.