Microsoft Accepts Bitcoin After All 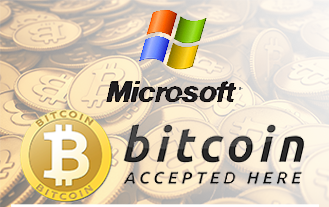 Earlier in the week, Microsoft came out with a statement on its Windows Store explaining that it will no longer accept bitcoin payments. It seems that the announcement is now gone, and reports are coming in highlighting the possibility that the announcement was a mistake. Microsoft should be accepting bitcoin indeed. Customers can still add money to their Microsoft accounts with bitcoin, as shown in their official ‘how-to’ page. This leaves us wondering even more now about what really happened with Microsoft and why this glitch took place. Regardless of the reason, the more mentions Microsoft gets on all kinds of media, with regards to its bitcoin policy, the more it catches the attention of the public.

On Monday, March 14th, we published an analysis article detailing why Microsoft might have gone off bitcoin. It seems that the reasons we suspected were responsible for Microsoft’s move, are not relevant anymore. This highlights the importance of careful coordination within companies to avoid misunderstandings that may confuse customers. However the possibility of the glitch having a positive effect seems to be the same nonetheless. Microsoft is getting mentions on online media sources for the bitcoin payment glitch now.

A World of Earned Media Coverage

This whole bitcoin payment saga, whether by design or by mistake, has earned Microsoft a good deal of coverage. This could prove to be good for Microsoft, regardless of its original intentions vis-à-vis bitcoin. The whole paid vs earned media coverage has certainly played a role in the US elections, as per reports on the New York Times. There is no reason why Microsoft wouldn’t be able to enjoy the same kind of benefit.

The main difference between Microsoft’s earned media coverage and that of certain candidates in the recent election cycle, is that Microsoft’s glitch is catching the attention of online media primarily; presidential candidates are earning mentions in all kinds of media. Therefore the impact of Microsoft’s bitcoin payment glitch will not be as far reaching for publicity purposes.

The bottom line is that bitcoin users who are Microsoft customers, might have been temporarily confused. It is safe to assume that they have read the news about the glitch and have come back to the Windows Store to acquire Microsoft products with their bitcoins. Hopefully the software giant will not make a similar mistake again, even if it brings it more earned media coverage.