Bitcoin might have surpassed the $10,000 USD mark, but Litecoin at $95 USD, is giving hodlers more value for their fiat and future opportunities they must consider. Litecoin is finally forging its own identity and more good news should follow. 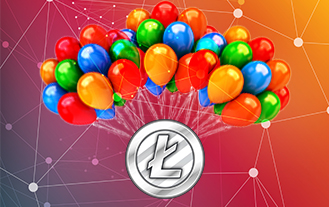 As Bitcoin hit an all-time high above the $10,000 USD mark for the first time ever, Litecoin quietly progressed towards an all-time high of its own. At above $95 USD, Litecoin is taking care of its investors as well, or maybe even better than Bitcoin. This is due to 3 main reasons: Litecoin started the year at the $4.51 USD mark, and its price is now over 21 times greater. Litecoin’s quiet yet meteoric rise comes as it implemented SegWit before Bitcoin did, keeping the cohesiveness of its community while getting its creator – Charlie Lee – working back full time on the project. Finally, its departure from SHA 256 is allowing it to position itself as a safe haven as compared to Bitcoin, which now competes with BCH for mining power.

It seems that Litecoin’s identity as silver to Bitcoin’s gold, changed this year without grabbing too many headlines. Markets however, did take notice. Bitcoin so far this year grew by a factor of 10 in terms of price. Litecoin is currently outperforming it by a factor of 2 to 1. $100 USD worth of Litecoin on January 1st, 2017, would have bought an investor about 22 LTC. The same amount on Bitcoin on that same day, would be equivalent to 0.1 BTC. As of now, the investor who bought 22 LTC on January first, has $2,090 USD in Litecoin, whereas the investor who bought 0.1 BTC on the same day only has about $1,000 USD. Nevertheless, Bitcoin is the flag bearer and the bigger coin in terms of market capitalization as well as network effect, therefore it is more likely to grab the attention of anyone interested in the world of cryptocurrency.

Being the smaller coin probably benefitted Litecoin. Its implementation of SegWit, although it faced resistance from miners in the beginning, went through smoothly. The community embraced it and eventually the miners did as well. No one forked away once SegWit was implemented. Bitcoin on the other hand, went through a highly publicized split that landed it in a somewhat precarious situation, with miners able to switch back and forth from BTC to BCH, threatening it with stagnation.

From the top 5 cryptocurrencies by market cap – excluding Ripple – Litecoin is the only one that was not forked or was not the product of a fork. Nevertheless, it shares what some might say is a positive characteristic, with one of the networks that did fork: Ethereum. Charlie Lee, Litecoin’s creator, decided to go back to work full time on Litecoin this year. Much like Ethereum, now Litecoin also has a visible leader, which is what Bitcoin is lacking. Although this might run against the principle of hardcore believers in decentralized networks, a visible leader doesn’t really make the coin more or less centralized, but it can have a soothing effect on investors – especially those who are flocking in from fiat.

Another key aspect of Litecoin that differentiates it from Bitcoin and is now a crucial element of its identity, is the mining algorithm. Bitcoin is based on SHA 256 while Litecoin is based on Scrypt. There are no other Scrypt-based coins in the top 30 by market cap that can compete for mining power with Litecoin. Dogecoin is the closest Scrypt-based coin in terms of market cap, and it is currently ranked #40 on Coin Market Cap.

Given the lack of competition it faces for mining resources, the cohesiveness of its community – as measured by the likelihood of a hard fork split like the ones on Bitcoin or Ethereum – and how well it has performed this year, Litecoin should become more appealing, given that it is clearly more than just silver to Bitcoin’s gold. Litecoin is finally shaping its identity. It is close enough to the principles that Bitcoin upholds, yet it has proven to do better than its older brother on every parameter this year, forging a great niche for itself. Litecoin should now be seen as a digital asset that has the capability of doing better than Bitcoin; it shouldn’t be taken as silver to anyone’s gold anymore.