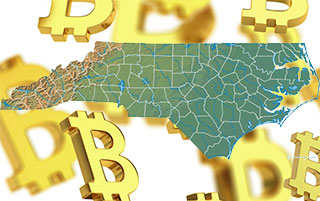 Eight years after bitcoin was invented, the cryptocurrency revolution is in bloom. As expected, the legal frameworks of virtually every jurisdiction on earth, are still playing catch up. North Carolina recently took the lead in the race to chase cryptocurrencies down. The state included virtual currencies in its Money Transmitters Act, effectively regulating bitcoin and all its peers as an instrument used by money transmitters. The act is limited solely to money transmitters, leaving individual users, miners and other such actors out of its regulatory framework for now.

Why North Carolina Stands Out?

The inclusion of virtual currencies in the North Carolina Money Transmitters Act is the first step towards establishing clarity for businesses and individuals dealing with bitcoin and other cryptocurrencies within the state. It comes at a time when judges in different jurisdictions – most recently in Florida – have had to rule on cases which have virtual currency components, without having the legal basis to even define what virtual currencies are. North Carolina has cleared some of the ambiguity in this first step, which will help the legal apparatus within the state to be more clear and consistent in cases that involve virtual currencies. As a result, businesses that deal with these instruments will also have more clarity going forward about the legal standing of their activities.

Although it would seem that other states – perhaps New York or California – should be leading the pack, due to their stature as global high tech and finance hubs, it is not surprising to see North Carolina taking the lead. North Carolina is one of the leading states in terms of the development of its financial industry, within the US. The Economic Development Partnership of North Carolina even puts the state’s financial industry in second place nationally. Both Bank of America and Wachovia are based out of Charlotte, the second biggest city in the state.

This makes regulation of virtual currencies a crucial step in the path to solidifying North Carolina’s position as a leader in the financial industry. The effort is a first step towards providing greater clarity for FinTech start-ups and other actors that may want to take advantage of the access to the state’s financial industry.

North Carolina, as well as every other state in the US and countries worldwide, still need to do more to fill the regulatory void left by the advent of bitcoin, cryptocurrencies and blockchain technology. Money transmitters in the state now know where they stand vis-à-vis virtual currencies, but now some discrepancies as to which digital asset may be interpreted as a virtual currency or otherwise will arise. The CFTC for instance, declared bitcoin a commodity. This definition contrasts with the one in the North Carolina Money Transmitters Act, for which bitcoin clearly fits the description of a virtual currency.

Some degree of harmonization, between the states and within the US, as well as internationally, will occur. It will take time, and while the discrepancies are sorted out and all the voids within regulatory frameworks are filled, there will still be confusion. Nevertheless North Carolina positioned itself as a jurisdiction that will anchor the development of regulation by setting a precedent. Other states might well follow in its path, which makes this piece of legislation even more important. North Carolina’s step allows it to jump start its leadership role in what will surely become the most critical tool for the financial industry in the 21st century.

Click here to read the changes in the North Carolina Money Transmitters Act.