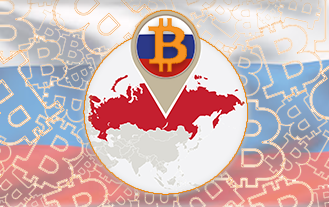 If banning bitcoin and punishing its use harshly would be an Olympic sport, then Russia would be a serious contender for a gold medal. Russia has in the past threatened people with considerable jail sentences and fines for using bitcoin or other cryptocurrencies, to the point where Russian cryptocurrency enthusiasts have had to hide their identity in order to protect themselves. Nevertheless, it seems that Russia is slowly moderating its tone, and recently it seems that the authorities there are ready to turn the page and open up to bitcoin.

Other Countries have backtracked on their Bitcoin Bans

There seems to be a trend that is slowly getting through to Russian authorities. Many of the governments that initially sought to outlaw cryptocurrencies and bitcoin in particular have walked through the path towards understanding and acceptance. Chief among them is China. The authorities there initially outlawed bitcoin, but rapidly understood that it made sense to tolerate its use. After all, more than half the mining power in the Bitcoin network resides in China, so it makes sense to let the sector make money in China, and capture a piece of it through taxes and other avenues.

The Bitcoin Ban in Russia is Tougher

Unlike Chinese authorities, Russian authorities had no immediate, tangible incentive to turn their policy around. Yet it seems that the time has come for more openness and for authorities to move towards the path of policy harmonization there as well. The initial fears that sparked the anti-bitcoin and anti-altcoin movement in Russia – criminal activity like money laundering – have been largely dispelled. This means that Russian authorities can now consider the cryptocurrency movement as a source of income from taxes, or as an instrument that will serve to develop Russia as a FinTech leader.

Nevertheless the official softening of the stance on bitcoin within the Russian government, will still have to be codified into law. Until then, uncertainty prevails, but at least Russian authorities have abandoned the philosophy of automatic criminalization of cryptocurrency users. Authorities will instead put an emphasis on monitoring and analyzing the use of bitcoin and other cryptocurrencies for criminal purposes.

This hopefully means that they will start using the blockchain to try and catch those who use bitcoin for criminal purposes, instead of assuming that every bitcoin user is a criminal. In any case, Russian authorities might find out through their monitoring efforts that criminals are much more likely to use cash. Cash is the number one offender and the preferred laundering instrument among criminals by a long shot. After all, the Ruble is still much more widely accepted than bitcoin, so Russian authorities will probably find out that by liberating some of the resources they invested criminalizing the odd bitcoin user, they will be more effective at catching the real criminals.