Bitcoin Prices Above The $1,000 Mark Shed New Light On Its Future 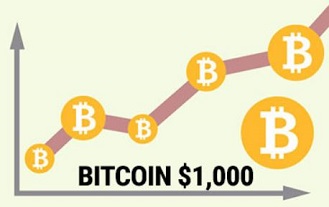 Bitcoin began the New Year right where it left off in 2016. On the first day of 2017, its price surpassed the $1,000 USD mark, and it continues to rise towards new highs at an incredible speed. In fact, bitcoin is racing towards all-time highs, positioning itself at the highest price point in 3 years. This latest Bull Run that started a few weeks ago, shows that the first cryptocurrency has a lot of potential to deliver value to its holders. It also reaffirms the notion that analysts must look at bitcoin from different points of view. Bitcoin’s increasing value might reinforce its flaws as a currency so users should take a look at it from a different perspective.

Bitcoin is rocking the markets

There is no doubt that as a vehicle of investment, bitcoin delivered great results last year. Compared with commodities and stocks, its position was unchallenged. But as a currency, it might be a little less appealing. The fact that its value recently surpassed the $1,000 USD mark and continues climbing, brings bitcoin’s deflationary characteristics to light. These characteristics discourage consumption, since bitcoin holders will try to keep their coins to increase their wealth.

This is why potential bitcoin users, might want to look at the cryptocurrency as an asset to invest in or as a mechanism to boost their savings. It is a better idea to spend money denominated in other currencies, and rising bitcoin prices only serve to reaffirm this notion. Bitcoin might be better suited to be an instrument that is used in fewer transactions but serves as a tool for savings or investment, rather than as a currency that can handle high transaction volumes.

The block size debate after Bitcoin surpasses the $1,000 mark

As bitcoin continues to surge towards new highs, the issue about block size could become less relevant in theory. Assuming rational behavior and taking the characteristics of a deflationary currency into account, transaction volumes could face downward pressures as bitcoin values continue to climb, since rising prices can hinder consumption. There might be more buyers trying to acquire bitcoin, but once they have the coins they will be less likely to use them to settle debts or for consumption. Unless demand for bitcoin generates upward transaction volume pressures that are greater or equal to the downward pressures on transactions within the bitcoin economy, rising prices could alter the logic behind the block size debate.

In general, transaction volumes are growing progressively. Nevertheless, when looking at bitcoin transaction volumes from the last 30 days focusing on yesterday’s levels, when it surpassed the $1,000 USD barrier, there might be an indication that a downward trend in trading volume is possible. If that downward trend consolidates, the need to increase block size or otherwise upgrade Bitcoin’s transaction capabilities may diminish.

If Bitcoin keeps on climbing…

This could serve to enable further growth. Decreasing transaction volume could, counter-intuitively, become a predictor of further increases in bitcoin prices. This could turn into a spiral in which positive feedback loops reinforce demand for bitcoin. This will also push bitcoin further away from its use as a currency. These feedback loops have the potential to perpetuate the conditions that make bitcoin a flawed currency and an excellent commodity or asset to invest in.