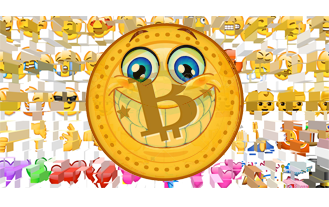 Bitcoin Chaser has officially launched a petition to all the apps and chat services out there, from Skype to WhatsApp, to include a bitcoin emoji. This emoji would not only give bitcoin enthusiasts a special way to express their appreciation for the cryptocurrency on social media, chats and statuses, but would also be justified for a number of reasons. If services like WhatsApp and Skype have dollar sign, dollar bills and other such emojis, then the currency that brought blockchain to the world should be honored.

Apart from the fact that bitcoin brought about the next FinTech revolution, and all the other merits that should make it an automatic emoji candidate, people increasingly communicate more through the use of emojis. Without the bitcoin emoji, social media and messaging apps are missing a whole word in their repertoire. This repertoire also has the potential of becoming the closest thing to a globally recognizable language, which makes the case for a bitcoin emoji even stronger.

The Prevalence of Emojis in Modern Day Communication

Major brands around the world are taking advantage of the whole emoji trend to launch advertising campaigns on social media. These brands are using the prevalence of emoji and the ease with which they can communicate with their target audiences through the use of these emojis, to their advantage. In fact, emogi.com claims in their 2015 emoji report that their own emoji powered Emogi ads get twenty times more click rates than the regular ones. Bitcoin should have its own space in this realm as well.

Imagine how many companies could launch an advertisement campaign geared towards the bitcoin community by using emojis only if the bitcoin emoji existed? For instance, Tesla could launch a social media initiative using a bitcoin emoji, given that it accepts bitcoin payments for its cars. Apparently such an ad initiative will get Tesla, and any other company that recurs to it, much higher response rates.

We could probably launch a bitcoin emoji initiative by using only emoji to highlight our need for a bitcoin emoji, but that would only get us so far. In the meantime, we have taken the first step with an online initiative to collect signatures. Hopefully this will be the first step in a campaign that we hope will gather steam. We hope this initiative will get enough people to notice that the need for a bitcoin emoji is real. We increasingly communicate through emojis on chats, messaging apps and social media. Besides that, it is kind of ironic that such a crucial invention like bitcoin, which will power a whole host of new generation apps and even some future messaging apps, will not have its own emoji on those apps. This situation needs to change!

Support our online initiative for a bitcoin emoji by signing our online petition here.