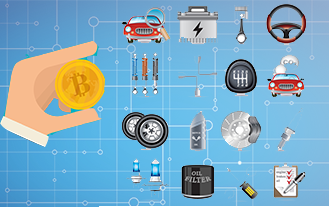 Nowadays, bitcoin users have access to an incredible spectrum of products available to fiat users. Apart from internet retail giant Amazon and other huge names like Ebay, bitcoin has been also used to buy real estate and cars. Now it seems that the auto industry precisely, is becoming more and more open to bitcoin payments. According to some online reports, Tesla cars have been purchased using bitcoin, and now Auto Parts Way has started accepting bitcoin as well. However, large scale acceptance of bitcoin in the auto industry for the most part, might not materialize any time soon.

Bitcoin works in a very different manner than fiat. The bitcoin economy is still quite small as compared to other fiat economies. Therefore it makes sense to sell auto parts for bitcoin, but it might not make sense to sell whole cars. Auto Parts Way – which sells auto parts in the US and Canada – has identified a niche market and it is now accepting bitcoin. This makes sense for at least another 2 reasons:

A relatively small economy with limited credit options means that auto makers and dealerships would be generally discouraged to accept bitcoin payments for their cars. However bitcoin payments might work for the luxury segment, since it caters to a fraction of the consumers in the world. Customers who buy luxury cars are also less likely to need credit in order to make their purchase. This is probably why a company like Tesla Motors, which sells luxury cars at high prices, would benefit from accepting bitcoin payments, beyond the free publicity. Additionally, customers who are attracted to a tech-heavy car like Tesla, running on electricity, are probably more likely to be bitcoin enthusiasts as well.

Other automakers should see less sales than Tesla in bitcoin terms. This is due mainly to financial constraints. Considering those great Toyota, GM or Nissan commercials, advertising $199 USD bi-weekly payments on their latest models with almost 0% interest, it is clear that the sales model is more difficult to replicate for bitcoin users. Unless demand for bitcoin payments is big enough, and one of the bitcoin exchanges or any such company, can team up with an automaker to bridge the gaps, bitcoin will remain off bounds for most car makers.

Implementation of smart contracts could bring more automakers closer to bitcoin. Also mechanisms to finance purchases made with bitcoin, coupled with good enough exchange risk mechanisms, can bring bitcoin payments to other automakers. In the meantime, Auto Parts Way jumped into the fray and is enjoying the advantage of wide media coverage – of which this article is part and parcel. Certainly the free publicity is a factor that both automakers and dealerships should consider. Whichever traditional automaker or dealership jumps into the world of bitcoin payments first, is definitely poised to gain from an almost risk-less move.