The Bizarre Case Of The Bitcoin ETF 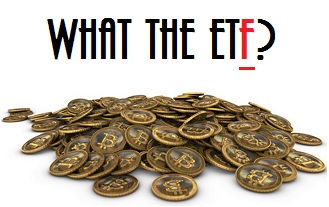 The SEC – Securities and Exchange Commission, a US government financial market regulator – is considering a few applications for a bitcoin ETF. An ETF works like shares in the stock market, with investors instantly able to buy or sell shares. These shares are based on the value of the underlying assets that the ETF represents. In the case of a bitcoin ETF, it seems that the only asset that traders will be able to trade on, is bitcoin. If this is the case, then these ETF initiatives could be one of the most bizarre financial assets ever invented.

Just buy some coins instead of buying bitcoin-based shares

Just thinking about a bitcoin ETF could give any analyst a headache. After all it is very difficult to justify any investment into a fund that represents the value of a digital asset. An ETF would make sense if it included a basket of cryptocurrencies, or bitcoin and shares of electric companies that provide electricity to bitcoin miners and some gold for example. In this case, the ETF options that the SEC is considering don’t include any other assets besides bitcoin.

The following is a list of reasons why such a bitcoin ETF defies logic:

Does a Bitcoin ETF have any Advantages?

Despite all the reasons there are not to buy into any of those proposed ETFs even if the SEC approves them, some investors that are on the fence right now may actually find them to be friendlier than owning bitcoin directly. First and foremost, these investors will be able to buy into the ETF through their trusted financial institution or fund manager. Additionally, ETF investors will not have to open another account with a financial service provider that they don’t know in order to buy into the performance of the asset, and they will be able to keep their funds in US Dollars.

Despite all of these perceived advantages, they will still be as vulnerable to sudden price changes as bitcoin holders themselves. This stems from the fact that any bitcoin ETF will have to make sure it holds enough coins to guarantee that its investors are actually buying into the asset. As a result, bitcoin prices could become much more volatile. ETFs would bring a lot more money into a relatively small market through investors that do not necessarily understand how the cryptocurrency works, and are not really interested in using it.

There is no doubt that purists as well as Satoshi Nakamoto himself (herself/themselves) would be completely irate at the possibility of having a bitcoin ETF. There is no way that they would support the use of bitcoin as a proxy for more middlemen to profit through what could become a highly speculative instrument that doesn’t necessarily serve to assign the right value to any kind of underlying asset. This makes the whole bitcoin ETF initiative even more bizarre. If it succeeds, bitcoin could become an enabler of middlemen and speculation, as well as an instrument that makes the few richer at the expense of the many.

How could a reasonable Bitcoin ETF work?

There is little that bitcoin purists could do to hinder any kind of bitcoin ETF initiative. However there might be some middle ground that could deliver more value to investors, ETF initiatives and bitcoin users alike. It would be more reasonable to design a bitcoin ETF that holds more underlying assets than just bitcoin. Buying shares of companies that generate electricity for cryptocurrency mining, acquiring more cryptocurrencies to offer to investors as underlying assets, and even having a percentage of the ETF invested in other underlying assets such as precious metals, would be more reasonable. This will also serve to reduce investor risk and bitcoin price volatility, simultaneously adding some kind of value that would somehow justify the trading fees. In the meantime, it is all up to the SEC. None of the bitcoin ETF proposals out there seem to be reasonable or logical; they are rather bizarre, if not outright ridiculous.