By Amelia Tomasicchio
Published May 25th, 2017 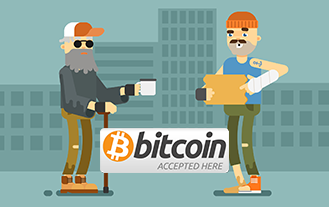 You might have seen this picture on Reddit or Facebook where it became quite popular among the bitcoin community. We were curious about it, so we decided to do a little research on it. This is not the first such picture that we have seen on social media, and we cannot determine the status of the bitcoin homeless man with any degree of accuracy. Nevertheless, our staff did check the address on the picture to see how he did so far, and compared the case to others before it. Here is what we found out.

Like we all know, we can check any bitcoin public address and see the funds that are in it as well as a transaction history. A quick look on blockchain.info, reveals that there were some in the community who did donate over the last few days to the address on the picture. We can, of course, see the addresses from which donations came.

How Much Did Bitcoin Homeless Man Get?

Bitcoin homeless man started to accept bitcoin donations on May 21st, at least with this wallet address. He received a total amount of 0.35842588 BTC, so roughly $800 USD if we consider the current exchange rate (May 25th, at press time). Bitcoin homeless man wasn’t ‘hodling’. He withdrew 0.34990576 BTC yesterday on May 24th. That said, we should consider the possibility that bitcoin homeless man is not necessarily in dire need of money and this might all be a ploy. Then again, we have no way of determining that.

Whether he was in dire need of money or this was all a scam, bitcoin homeless man is not the first who did this. There are a few other cases of bitcoin homeless people whose pictures (and maybe even stories) you can find on the web. For example, in 2013 Wired published a piece about a few guys that scrounged for bitcoin outside a public library in Pensacola, Florida. Jesse Angle was one of them, but he decided not to panhandle. Instead he used the internet to watch YouTube videos in exchange for bitcoin thanks to access to the free wireless service access located in the Martin Luther King Plaza park. Coupling that with a service called BitcoinGet, he managed to put together a few coins.

Another case is that of a 27-old man in 2013. This bitcoin homeless man told Coindesk that he was able to survive only thanks to bitcoin. The cryptocurrency allowed him to overcome the lack of banking services, given that he cannot open a bank account because of his nomadic life.

Bitcoin in the Cashless Society

The stories of these bitcoin homeless men, might become more of a rule than the exception in the future. Many countries are considering going cashless, which could raise the bar for homeless people in need. They will need computers or smart phones and will need to be tech savvy enough to scrape together a few bucks. On the other hand, a portion of the so-called underbanked, are already in touch with these technologies. For a few of them, reliance on non-traditional forms of finance like bitcoin and digital currencies in general is not new.

The Future of Bitcoin Homeless Man

Many of us already live in societies which are largely cashless. This means that bitcoin homeless man might soon find himself in the company of other like him. This might make it tougher for homeless people to collect money off the street, but could also make their efforts more fruitful. Bitcoin homeless man did collect about $800 USD in a few days, which shows how fruitful his efforts were. Then again this might be due to the novelty of bitcoin and the tight community within which it is used. The future for the likes of bitcoin homeless man is highly uncertain.