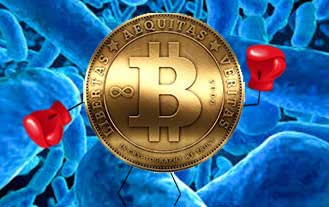 In the world of bitcoin and other cryptocurrencies, saying that cash is dirty, is basically a pre-requisite for acceptance. From crypto-anarchists to the more moderate members of the Bitcoin community, everyone agrees that government backed cash has a lot of problems. Yet most would find it intriguing to know that one of the biggest problems with cash, has nothing to do with the monetary system but rather with public health.

An article published recently in Scientific American, shows how dirty cash can be a hazard to people’s physical health. Apparently those who deal in cash, come into contact with a wide variety of potentially deadly bacteria. Cash may carry anti-biotic resistant MRSA, fecal matter and even Escherichia coli, which according to the article can cause kidney failure.

Smaller denominations are usually more contaminated. That means that a higher percentage of $1, $5, and $10 US Dollar bills in circulation are contaminated in comparison with $50 bills for instance. This is due to the fact that smaller denominations are more widely used. Since bills can last for up to 15 years, the problem could be more serious than many would think. Coins last longer in circulation – about 25 years – but people can at least toss them into alcohol and kill the bacteria on them. In any case, given the fact that pouring disinfectant on coins is not something people do on a regular basis, the public health risk from them remains.

This discovery should lead governments to allow people to literally, launder their dirty cash. Bills should be completely washable, it is apparently a matter of public health. Until that happens, bitcoin is of course a great option for those who are willing to use it. Others may choose to use anything from PayPal to debit or credit cards. Given these discoveries, governments have one more reason to go cashless even. Which technology they choose to do so, and the implications of that choice are another matter.

In the meantime bitcoin users can rejoice. They are enjoying the health benefits of avoiding cash while they also sidestep the perils of being too exposed to government-backed money. This hidden benefit that bitcoin users enjoy, is quite surprising. It turns out that Satoshi Nakamoto might have found a cure for a public health hazard apart from delivering a solution to P2P transactions and dependence on intermediaries. If people were talking about nominating him (her/them) for a Nobel in economics, they could well nominate Nakamoto for a Nobel in medicine for his (her/their) contribution in the prevention of pandemics.