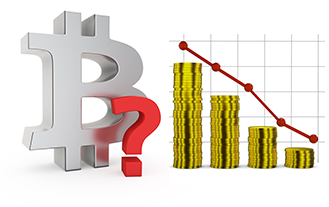 2016 started on a good note for bitcoin. The cryptocurrency reached the $450 USD mark on January 8th, providing hope for those who were following the mining reward halving thread. However, as stated before, there are many other factors that affect the price of bitcoin. The main factor that could have led to the downturn, is definitely Mike Hearn’s move declaring the Bitcoin experiment dead. Bitcoin has been unable to recover since, even with the mining reward halving around the corner, but other factors will probably affect its price going forward.

The Power of One

Under the scenarios that Hearn highlighted in his blog entry a few weeks ago, transactions on the Bitcoin network will become too cumbersome to be competitive. This could completely negate the boost that bitcoin should receive from the halving of mining rewards. The idea of holding a scarce resource that is getting scarcer, but on the other hand cannot be used the way it is intended to, will prompt users to look for alternatives. In the cryptocurrency world, alternatives abound. That is one of the reasons why the declaration of Bitcoin as a dead experiment has had such a lasting impact on the value of bitcoin so far.

Bitcoin however, is no stranger to controversy. The cryptocurrency has seen its price stumble steeply before, and has subsequently seen some recovery. Underlying technical problems aside, the behavior of bitcoin itself is volatile, but has been showing signs of stabilizing. It also recently posted record usage numbers during the past holiday season, which is a source of optimism. Also, a currency that shows signs of devaluation, tends to be used more. Consumers would like to get more for their coins, and if they see bitcoin devaluating in the near future, they might be more inclined to spend now.

If consumers spend more of their coins now because they fear that price is going to go down, then this might exacerbate the transaction issues that Hearn pointed out. This could be positive for Bitcoin; a shock to the system may prompt quicker change. However there is no way of knowing for sure if this shock will have a positive outcome, or if it will happen at all. Although transaction volumes have been inching up over the past few days, they are off their holiday season peak a few weeks ago. This means that lower bitcoin prices are not having a dramatic effect on expenditure, at least not the kind that could deliver a shock to the system immediately.

Not the Only Player on the Block

This brings the analysis back to square one. Looking beyond Hearn’s remarks, it is necessary to consider seriously the alternatives that the world of cryptocurrencies offers. Within all the private currency initiatives that have brought around 700 cryptocurrencies to the fray, traditional banking institutions working on their own block chain-based initiatives will probably have an edge on Bitcoin as a transaction service and payment method pretty soon.

This could discourage more mainstream bitcoin adoption, relegating the currency to the fringe. This scenario would have negative effects on the price of bitcoin, which in turn could encourage further centralization of the network. This could exacerbate Hearn’s scenarios. It seems that many factors that could impact bitcoin price positively, might also have a negative effect on the currency and vice versa.

It is clear that the bitcoin party in 2015 is now giving its users a bit of a hangover. Bitcoin has gone from $450 USD in January 8th to around $375 USD today. That is a loss of 16.7% in a little more than 3 weeks. What started with Hearn’s comments on the Bitcoin network, has spiraled down pretty quickly. However, it seems that the cryptocurrency is stabilizing and is not following one of those steep falls it has known in the past. This might be a sign of maturity, encouraging bitcoin users to resist the urge to cash out. It is clear that although the whole argument between Bitcoin developers might have taken a toll on the currency, and despite the fact that mining rewards halving should have a positive effect on the currency’s price, other factors should be considered. At this point, the bitcoin price riddle seems like one of the hardest to solve out there.