Chasing the 2016 Price of Bitcoin 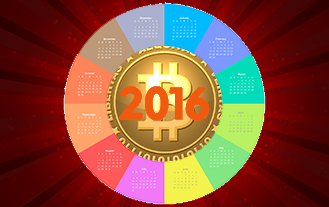 Enthusiasts all over the web have been following the price of Bitcoin for a few years now. As the experiment progresses, and more followers join the crowd, there is more interest in Bitcoin’s future valuation. This is especially true now given that mining rewards should halve during the summer of 2016. Conventional wisdom will lead everyone to believe that the halving of rewards will push the price higher. Although this is an important factor, given that scarcity of any desired asset will push its price up, there are more factors that can affect the price of Bitcoin in 2016 and beyond. The value of Bitcoin during 2016 will depend on what happens with the world economy in general, the factors that affect demand for Bitcoin in general, and the way Bitcoin is viewed. Coin reward scarcity will not be the only factor.

Many economic events are somehow related to the change in Bitcoin valuation this year. The most obvious would be the ‘Grexit panic’ about 6 months ago, coupled with China’s deceleration. In the case of Greece, fears about economic collapse seem to be over, at least in the short term. Unless another heavily indebted Euro member – and there are quite a few – does not falter, it seems that Bitcoin will not receive a big boost from economic woes in the Euro zone.

China’s economic slowdown, is probably going to continue. Unless it will be steeper than expected, then it will likely have a moderate effect on the valuation of Bitcoin. China’s slowdown has affected the price of physical commodities, and those seem poised to keep on falling. As prices of physical commodities fell, Bitcoin has seen overall strengthening.

During 2015, there has been an inverse relationship between the prices of the first virtual commodity/currency and traditional commodities such as gold and oil. If there is any correlation between the two, the Chinese economic slowdown can have more of a positive effect on Bitcoin valuation than expected. Nevertheless, any analyst trying to find a correlation between the prices of commodities and Bitcoin, may overstretch arguments or ignore some basic assumptions.

To understand what the correlation might be, if there is any, it is necessary to look at a few commodities that will have a more direct effect on the factors of Bitcoin production and/or transaction cost, and then try to figure out how their price could affect the cryptocurrency. For this purpose, the price of oil seems to be the most obvious one. Oil is mostly used to produce energy, so the assumption is that if the price of oil is low, the cost of producing energy from oil derivatives will be lower. This will have an impact in energy markets as a whole, a portion of which will affect the cost of Bitcoin mining.

Overall, cheaper energy costs should have a positive effect on the profitability of Bitcoin mining operations. With Bitcoin rewards halving, this could neutralize any possible transaction hike, since profitability will be somehow guarded by lower production costs. If energy price has any correlation to the price of Bitcoin, this could moderate expected increases in Bitcoin value due to the halving of mining rewards.

For people looking into Bitcoin as a store of value, which is what seemed to encourage Bitcoin purchases during the ‘Grexit panic’ and the Chinese downturn, then a comparison to gold might be a better gauge of what is in stock for Bitcoin during 2016. The price of gold has progressively declined during 2015, whereas Bitcoin is set to end the year with increases of 100% or more in valuation. Should these patterns hold, and investors will see Bitcoin as a store of value asset, then valuation of gold could be inversely related to that of Bitcoin. However the store of value argument relies heavily on the assumption that investors would rather take a bigger risk on Bitcoin than a smaller one on gold to protect their capital from market volatility. Therefore other factors that may affect the value of Bitcoin should be analyzed to better assess its valuation trends during 2016.

Bitcoin as a Method of Payment

Clearly one of the most interesting aspects of Bitcoin and the underlying technology powering it, the blockchain, is that it can replace any given payment method as long as the parties have enough faith in the currency. To see Bitcoin in this light, it is necessary to put some other economic factors that have drawn so many comparisons between Bitcoin and gold, aside. The most important among those factors, is the fact that both Bitcoin and gold are deflationary in nature when used as currencies. To avoid seeing Bitcoin as a currency, it should be equated to other digital methods of payment such as PayPal.

At first sight, it seems that as a method of payment, PayPal would be much more popular than Bitcoin. This is probably true, but the growth story cannot be directly compared, given that the data is denominated in different units. However if a given value is taken for a given year on both graphs, and both are denominated in the same units, then a comparison could be made.

For the sake of simplicity, it would be fair to point out that Bitcoin, as a transaction system, has certain limitations that PayPal doesn’t. However, the volume of Bitcoin transactions, since they peaked in 2012, have been steadily growing again. This suggests that although adoption rate of Bitcoin is rising, probably it is growing at levels below those of PayPal. Bitcoin transaction growth patterns do suggest that there is a moderate upward trend. This trend will only grow if Bitcoin’s adoption is wide enough. Blockchain has the potential to revolutionize money transfers – and could compete with PayPal directly one day. Transfer volume, driven by an increase of Bitcoin acceptance could contribute to Bitcoin valuation in 2016.

Putting it All Together

Bitcoin valuation in 2016 will clearly depend on many more factors than just the halving of mining rewards. Bitcoin is advancing while commodities keep on retreating. In the realm of payments and transfers, Bitcoin is becoming increasingly important. Although Bitcoin will still be a volatile asset in 2016, these factors compounded with the assumption that the world economy will keep on facing some headwinds next year, point to upward trends in its value next year. We will keep on chasing Bitcoin all through 2016 and beyond, and we will keep all our fellow chasers in the loop.