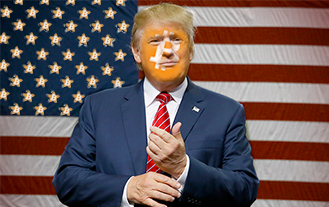 The recent election cycle in the US has proven to be so unusual, that commentators are running out of words to describe it. What makes this race so special, are the people running for office, especially the one who has dominated the media: Donald Trump. The Republican Party front runner, has dominated the headlines, and recently his name has been dominating Bitcoin community satire. Numerous Facebook groups and Twitter accounts that poke fun at Trump, have surfaced; their jokes are probably the most tactful words being thrown around during this election cycle.

Bitcoin has been a prominent feature in the election, thanks to the Republican Party in general, and Donald Trump in particular. The Republicans were the first to use a blockchain-powered ballot in US history for their primaries in Utah. Trump was handily defeated there, but Bitcoin still had some more in stock for the Republican Party front runner. Trump could well go down in history as being the first presidential hopeful in US history to be widely mocked by the Bitcoin community.

In fact, he could be the first presidential hopeful to have a whole Twitter account dedicated to translating his sentences into ‘bitcoin’. Trump’s statements are so ‘bitcoinable’ that it would be a waste to just let them pass by, and the @trumpchain account on Twitter has been doing a fantastic job at immortalizing Trump’s comments. Here are some of our favorite trumpchain comments that entered the bitcoin hall of fame:

Can This Mobilize The Bitcoin Community?

Clearly, something like trumpchain should energize the Bitcoin community in the US to become more active politically, which so far has been difficult to do. It seems that when a candidate or a politician comes out for or against the cryptocurrency, is precisely when bitcoin users’ political sensitivities come to light. Other than that, bitcoin seems to have taken a back seat in terms of electoral activism. Although candidates like Libertarian Rand Paul tried to play the bitcoin card to raise funds for their campaign, the move certainly did not bring Paul as much media attention as trumpchain brought to Trump.

The private sector has been arguably much more successful at using the Bitcoin brand to attract customers than the politicians have been when trying to attract voters. This could be largely due to the fact that as a voting group, bitcoin users are not too valuable in the electoral scheme. Bitcoin users are still a small group of people relative to others that candidates could target. They are also predominantly libertarian, which means that they are likely to vote only for specific candidates.

For all its virtues, trumpchain-like initiatives might be unable to mobilize the Bitcoin community in the US for or against any particular candidate. However, by giving Trump all this media coverage, we could be all guilty of inadvertently fueling his rise in the world of politics. Although it would be better to stay away from the US presidential race headlines for the sake of being fair, it is nearly impossible to resist the temptation to talk about Trump. Trumpchain and other similar social media initiatives just give us an additional reason to participate in the media frenzy surrounding the most unusual presidential campaign in US history.