The Cryptocurrency of the Day to Keep Creditors Away 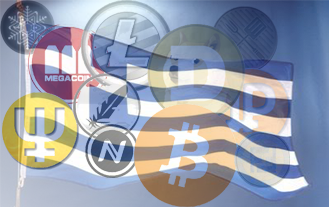 In its short history, Bitcoin has emerged as an asset used to safeguard wealth from economic instability. Bitcoin price rose particularly when countries prone to capital controls of all sorts faltered. Although it’s characteristic as a decentralized currency appeals to those trying to escape events such as sudden limits on bank withdrawals, its deflationary nature makes it a non-starter for governments trying to pull themselves out of economic downturn and excessive debt. However, some of Bitcoin’s characteristics could actually help create temporary currencies for countries to avoid collapse.

The idea was first brought about by Yanis Varoufakis, the firebrand Minister of Finance in the previous Greek government. Despite the out-of-the-box thinking, it is still unclear whether creating an alternative cryptocurrency would be a good idea for Greece. Moreover, it is not clear whether the cryptocurrency suggested would actually circumvent the deflationary nature of Bitcoin, or whether it would be likely to be used at all.

Mr. Varoufakis floated the idea of creating a parallel Greek currency – parallel to the Euro, which is the legal tender in Greece – about 2 years ago. Ever since, Greece has had a series of worrying games of chicken with its creditors. One of the main problems facing Greece – and other Euro zone economies – is that it surrendered most of the monetary controls on its economy, including monetary policy, by joining the Euro. The European Central Bank or ECB controls monetary policy on the Euro, including supply through interest rates and other mechanisms like quantitative easing. This means Greece cannot resort to a devaluation of its currency to jump start its economy; the ECB controls the currency in Greece and will not engage in measures that will cause the Euro to devaluate without taking into consideration the needs of the other members of the monetary union.

These dynamics create an environment in which the Greek economy is being held up to extreme standards of austerity that according to Keynesians cause the economy to shrink. If the economy shrinks, it will have less resources to service its debt, which will in turn lead to more economic malaise. The Greek government does not have a way out of this spiral. The only solution is to generate enough fiscal surplus to service the debt, cutting funding from welfare and other government spending. Mr. Varoufakis’ idea to create a parallel cryptocurrency based on tax collection a few years in the future, would allow the Greek government to increase spending without using the Euro directly. The cryptocurrency would allow Greece to issue debt without having the ECB, IMF or other European creditors backing it, officially.

Having the Cake and Eating it

This idea is indeed quite an innovative one. It builds upon the principle of Bitcoin to surpass a supranational coin like the Euro in favor of the needs of one of the nations that make up the supranational block. The main problems with this proposal are that the coin would be denominated in Euros and it relies on future tax collection. This is tantamount to issuing the first bond powered by the blockchain that can be used as a currency.

Given Greece’s tax collection track record, this cryptocurrency would be pretty risky. The risk would be compounded by the fact that Greece would still have to use a significant amount of its taxes to service its current debt, let alone pay for yet more debt in the future. This would weaken the credibility of any future commitments to redeem the new cryptocurrency once it matures. Perhaps that is what Mr. Varoufakis was shooting for. After all, he did criticize Bitcoin, identifying it as a deflationary currency. In theory the conditions under which the parallel Greek cryptocurrency would be launched, would achieve quite the opposite effect. Since it would be difficult to believe that the government will actually be able to pay the amounts promised once the coin matures, people would seek to spend it fast lest they be the last user to hold it.

The Euro denominated debt that the cryptocurrency would create, could push the whole Eurozone further down. Once this cryptocurrency matures, if the Greek government cannot pay the holders the amount due in Euros plus the premium promised, Greece would have succeeded in acquiring more sovereign debt without permission. The de facto creditor would then again be the ECB and other members of the monetary union, which would be forced to intervene in order to prevent Greece from crumbling, once again. This measure would effectively allow Greece to continue getting a line of credit from its creditors while circumventing the austerity measures that were imposed in the first place to allow Greece to gain access to a line of credit.

Thinking Outside the Box

It is clear that Mr. Varoufakis came up with a clever possible solution to the most immediate Greek problems. This is the kind of thought that Bitcoin and blockchain should be inspiring. However, good tacticians are not necessarily successful in the long term. The main difference between Mr. Varoufakis’ solution and Bitcoin, is that the latter was built to last longer and to present a different strategic outlook to many of the problems that the current monetary system has, while the former offers some breathing space but not a solution to Greece’s problems.

Bitcoin has its flaws, but it also has a vibrant community of users behind it, trying to solve them. A Greek cryptocurrency managed by the Greek government and denominated in Euros, could acquire the worse characteristics of both the fiat and the cryptocurrency worlds. Greece might be better off by embracing Bitcoin instead of creating its own cryptocurrency. If it can position itself as a Bitcoin haven, offering a clear legal framework under which Bitcoin entrepreneurs can flourish and tax companies dealing in Bitcoin, Greece would effectively incentivize business creation, and would be able to increase its tax base. This would also position it as one of the countries at the forefront of blockchain technology development.

Mr. Varoufakis should get a lot of credit for thinking outside the box. Nevertheless it would be better to assess the possibility of embracing Bitcoin instead of declaring it dangerous just because of its deflationary nature. Countries like Greece should be leading Bitcoin adoption instead of trying to create yet another currency based on the old bad habits that created all these debt crises in the first place. Entrepreneurs should be the driving force behind the solution to the Greek crisis, thus legislation that clears the way for Bitcoin entrepreneurs to settle and thrive should be the policy in Greece, instead of the creation of a cryptocurrency that will only prolong the malaise.

Unfortunately 2016 might see yet another round of confrontations between Greece and its creditors, instead of creative solutions based on an already existing cryptocurrency. Other countries mired in economic distress and poor governmental management have actually become budding Bitcoin adopters, without having the backing of clear government policy. Maybe Greeks should follow in the footsteps of Venezuelans and Brazilians who are actively using Bitcoin as a mechanism to save money and gain liquidity.