Development Industry Is Catching Up With Bitcoin 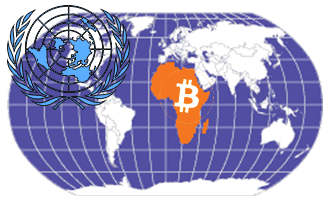 The UN has officially introduced bitcoin as one of its fundraising tools for development projects in Africa, more specifically, in Sierra Leone. The Twenty First Century African Youth Movement program, managed by UN Volunteers, is calling for bitcoin experts to train staff on the use of bitcoin, and on how to raise funds through the currency to fund their initiatives. Although this is definitely a step forward, it is a very limited one, given the potential that bitcoin and other cryptocurrencies have in the realm of economic development.

Bitcoin is actually a great alternative for people who do not have access to banking, of which many live in countries or regions that need more economic development. Bitcoin effectively removes the middle-men needed to open and operate bank accounts, giving the unbanked a double advantage:

This second point is especially important for people who do not have access to banking, who tend to be poor. If they can save money on fees while being able to conduct their business, then they stand to gain more, and access issues are quickly disappearing. Many of these areas of the world have access to internet through cell phones. In fact, some of the places where considerable sectors of the population are unbanked, are pioneers in cell phone payment services. One of the most striking examples is Kenya, which is among world leaders in cell phone payment systems.

Governments and Obstacles to Bitcoin

However bitcoin faces obstacles from the governments with which the UN has to work on the ground. It is easy to imagine how governments would move to impose the use of their own currency or any major international currency like the USD or the Euro, for any development projects. After all, it would be difficult to find a government willing to give up a measure of control over its economy over a development project that could be as easily funded through the use of a currency that serves the interests of local authorities.

Although they might have a vested interest in preventing the use of cryptocurrencies, local authorities might also benefit from increased bitcoin use in development projects. The use of the most widely accepted cryptocurrency could incentivize locals to sell their products abroad on a P2P basis. It also serves to open up the field of blockchain technology to their own development ideas, and it may even serve to reduce cash related crime like robbery.

The Future of Bitcoin in UN Economic Development Projects

Despite all the advantages that could be gained from the direct transfer of bitcoin for the implementation of UN-led development projects in Africa and elsewhere, the paradigm shift will take time. In the meantime the UN Volunteers have definitely taken a solid first step with their call for bitcoin experts to raise and manage donations for the Sierra Leona project. It is now up to the bitcoin community to answer the call not only through the training exercise, but also through donations and its involvement in the achievement of the goals set forth by the project. A greater degree of bitcoin contact with development in Africa and elsewhere is more likely to follow if the bitcoin community gets more involved.

Click here to read the posting on the UN Volunteers site.