Blockchain and the Building Blocks of a New Economy

Understand how blockchain may become a critical building block of the 21st century economy. 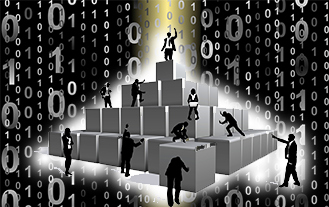 It is understandable that Bitcoin itself has gotten much more attention than the underlying technology that enables it. After all, it is perhaps easier to relate to how a new currency – or commodity, depending on who you ask – works, than to understand the underpinnings of how it is “minted”. This is why it is important to understand how blockchain technology works at a basic level, and understand how it may become a critical building block of the 21st century economy.

The basic idea behind the blockchain is simple. The blockchain is a distributive public ledger that records every transaction made. All transactions are recorded in the blocks, from the first transaction onwards. These blocks are available to the wider public and reside in different nodes, which makes hacking them nearly impossible, since the hacker would have to change the information in all the nodes at the same time. The information on the blocks is corroborated by all the nodes, which means that the system is pretty much fraud proof.

New blocks are discovered by a process that emulates real world mining. To make sure that the discovery of a block gets a coin award, at least 51% of the nodes have to confirm that the block is accurate for the person or group of people who discovered it. Once this happens, the block is adopted on every node, and the continuous cross checking process continues. The key to understanding how the blocks and blockchain technology can be used in other realms, lies in understanding all these corroborative interactions as the registration of transactions. All of these transactions occur in public and are available for anyone with an internet connection to see.

Transactions as a Mechanism of Democracy

Coupling the idea of transactions and the voting process, evokes images of fraudulent or corrupt actions within a democracy. However, the idea of casting a ballot for a given candidate is a certain kind of transaction. A person places his or her trust in that candidate so that the candidate can have the legitimacy needed to govern if elected. This is a non-monetary transaction at its simplest level.

Now imagine a world in which people can cast their vote as a transaction recorded by the blockchain. They would “deposit” their vote in the ballot box of their chosen candidate. The transparency and accountability mechanisms embedded in the blockchain would make sure that no one will be able to vote twice, just as it avoids double spending with Bitcoin. This is thanks to the fact that every person will get only one vote to deposit, and once it is deposited the ledger will make it public, corroborate it and make sure no other vote is assigned to the same person.

This technology has the potential to improve accountability and transparency when counting votes. It also has other less obvious benefits. Blockchain voting would significantly reduce the cost of having an election, because employing many people for the whole balloting process would not be necessary. It has the potential to increase participation, because of the ease of voting – theoretically, it could be done even through a mobile device, eliminating line ups at polling stations. It would help populous countries to hold elections and count the votes much faster. For example in India, the most populous democracy on earth, people would not have to line up at the polls for long periods of time and computers will be able to count the votes in record times. The issue of voting secrecy would still have to be addressed, but the potential benefits are too great to ignore the possibility of applying blockchain to the voting process.

Democracy would not be the only winner. The market would also benefit from blockchain technology, by implementing smart contracts. A smart contract, as conceived by Nick Szabo, would be possible because computers would be able to implement or enforce its clauses automatically without the need for an intermediary. Lawyers would then have their roles segregated more and more to the actual drafting of the agreement than to litigation. The number of judges could be significantly diminished since no rulings would be necessary; the contracts will implement themselves.

A clear example would be that of a loan taken to buy a car. Assuming that the car is “smart enough”, it would be able to either disable itself or drive itself to the lender if the borrower fails to make the payments. Blockchain would allow the car’s computer to corroborate whether a payment has been made or not, because the transaction would be part of the public ledger. The clauses of the contract then would be programmed both into the car’s computer, and recorded on the blockchain to build some kind of mechanism that prevents the car owner from hacking into the car’s computer and tricking it. Obviously, this will only be possible once tech giants and automakers come up with cars that are smart enough.

Will the Blockchain Rule All?

The Bitcoin revolution is clearly only one of the better known tools that can be enabled by the use of blockchain technology. Although there are still many aspects of this technology that both the experts and the public in general need to discuss and refine, it is clear that blockchain applications will be a significant part of our way of life regardless of what happens with Bitcoin. In every realm, from the exercise of democracy to the implementation of contracts through the use of blockchain, there are still barriers to overcome and unknowns to discover. Beyond the concept of blockchain and its applications, there is still a whole technological ecosystem to develop around blockchain for its use to become commonplace. This will take some time, and will probably face resistance from certain interest groups. Nonetheless, it is necessary to enable blockchain through active discussions and debates, in order for it to become an important building block of 21st century society.