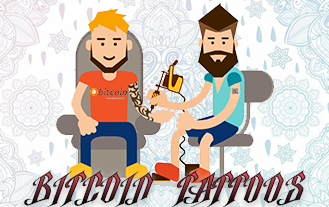 With the explosion in popularity of bitcoin and other cryptocurrencies, came the need to express to the world our affinity for the technology, or even how we see its future. Since body art has been a part of human culture for millennia, it would be just natural for people to start expressing their crypto-affinity through their very own tattoos. Some people are taking art to the next level, and inspired in the technological aspect that drives bitcoin, have even managed to create tech tats. This is certainly an exciting new field in bitcoin culture that has the potential to jumpstart a whole new sector in the FinTech industry: Wearable wallets.

From Old School Ink to Bio-Implants

Before the whole bitcoin tattoo culture starts blending into cyborg science fiction, it is crucial to highlight the importance of art as a driver of technology. There are many bitcoin and cryptocurrency enthusiasts out there who have proudly got their own ink B-stamp. Like most tattoos, some are skillfully done and some are a complete disaster; some of them are well thought out and others display poor planning. However the role of ink will be quickly displaced by circuits which can help the bitcoin or cryptocurrency user express his/herself, and will add functionality way beyond the decorative purpose of the tattoo.

It is all About Security and Style

Like everyone knows, the cryptocurrency crowd is generally speaking, security-minded. Encryption runs through their veins, so it would only be natural that they would do their best to keep their wallets safe. No wallet can be safer than the one directly implanted on your skin. Here is where ink meets circuit. A company called Chaotic Moon Studios is working to bring cultural expression into the cryptocurrency era with their own Tech Tats. The idea is to have a wallet embedded in tattoo-like art on your body, so you can enjoy the best security for your wallet as well as great wearable art in the most convenient manner.

If you want my Bitcoin Wallet, rip my hand off!

The secret behind this experimental technology that allows you to carry your wallet on you, is a special kind of paint that serves as a conductor. This serves to combine the wallet with your body without going all the way and embedding a device beneath your skin. In the meantime, Chaotic Moon has been trying to go one step at a time, so as to avoid making a radical step that would be rejected, culturally. Since tattoos are more accepted culturally than embedded electronic devices – especially when they are not permanent – it is a good starting point. After all, the gruesome scenario of a thief ripping your arm off to get your money is too much to handle under any cultural circumstance, so if your wallet is more similar to a sticker, we will not have to worry about that in the meantime.

Nevertheless it will be interesting to see the evolution from wearable devices in the form of tattoos, to implanted devices, just as much as it was literally eye-popping to see how low tech ink can be replaced by high tech body art. In the meantime, we leave you with the YouTube video so you can indulge in a little bitcoin cultural trip across the inter-webs.