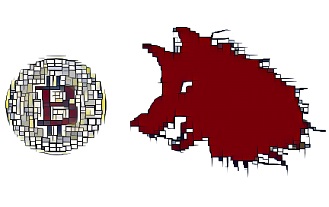 Mainstream media coverage of bitcoin price has been picking up over the last year. It might even resemble the rise in bitcoin prices over this period of time. With the rise in bitcoin prices and mainstream media coverage, also come the quotes from “experts” that are crying wolf, or rather bitcoin bubble. There are a few fundamental problems with this approach. Apart from the fact that human kind has never seen an asset quite like bitcoin before 2009, which makes it hard to study, the “experts” seem to miss the point altogether.

The latest example of this kind of ‘cry wolf’ comment, came from The Guardian’s article written by renowned economist Kenneth Rogoff. His argument is that the bitcoin bubble will burst under pressure from governments, basically because government has always eventually stepped in to regulate and appropriate when the private sector innovates, especially when it comes to the prevention of criminal activity and tax evasion. It is clear that Rogoff cannot free himself of the assumption that the future will mirror the past. But beyond that, Rogoff and other “experts” tend to miss the point altogether when it comes to bitcoin. Here is a reminder of why bitcoin is different and why talking about a bitcoin bubble is as speculative as singing its praises beyond the logic of its fundamentals:

Looking at Bitcoin Prices is Deceptive

Therefore, any “expert” that concludes that there is a bitcoin bubble just by looking at the price and assumptions about government behavior, is completely missing the point. Hypothetically, if there is a bout of hyper-inflation, bitcoin prices could sky-rocket into the millions, but those millions would be worthless. That is exactly what bitcoin is telling the world: if you are not hedged, you can be a victim of reckless government behavior, just like all those people who lost their jobs and pensions during the 2008-09 economic melt-down. Functionally speaking, fiat price of bitcoin ought to be less relevant, especially when only one side of the equation is considered.

Standing on a Soap Box Selling the Bitcoin Bubble

Furthermore, governments would be foolish to pursuit a bitcoin ban or any kind of assault on bitcoin – the argument on which Rogoff relies to sell the bitcoin bubble to the public. Bitcoin cannot be stopped. It is impossible to censor it, it cannot be shut down and as a protocol, sending coins resembles sending data over other networks. Legally it would be extremely difficult to challenge the freedom to send and receive little pieces of data over a network, especially in “free” “democratic” countries.

Beyond that, any government that prides itself in being free, democratic and espouses some free market principles, would be shooting itself in the foot if it prevents people from hedging their investments with bitcoin. That kind of behavior will make the next economic melt-down unnecessarily painful and costlier.

Looking Back Into the Future

Nevertheless, since Rogoff and other “experts” keep on drawing comparisons between a possible bitcoin bubble and other asset bubbles in the past, then they at least owe their readers some consistency in their analysis. Governments have a long history of allowing or actively causing the economies they manage to crash. If that is a historical given, then the bubble is more likely to come from other sectors in the economy, and can only be ameliorated by a strong alternative to the traditional government controlled economy. Furthermore, the criminal activity comes from governments then using tax-payer money to apply their too big to fail policies once the bubbles they enable, burst. Shouldn’t that be a crime on par with tax evasion?

Just as Rogoff makes his argument about a possible government crackdown world-wide, he must concede that this is an exogenous force, which has little to no influence on the value of the asset as it stands. If this crackdown ever comes, there is no doubt that bitcoin prices would be affected, but that doesn’t mean that there is a bitcoin bubble, or that the price will not recover precisely because more people see the benefits in being hedged against government excess. Moreover, a government crackdown and an attempt to subdue bitcoin while adopting blockchain technology, can quickly backfire.

The same technology that gives people freedom through the bitcoin network and its quasi-anonymous transactions, can spell authoritarianism and outright economic serfdom in the hands of a central bank. A blockchain-powered national currency controlled by a central bank is also inconsequential to the likelihood of future bubbles. It might be able to curtail criminal transactions done with national currencies, but it would subject society to the control of a police state that monitors every transaction. Criminals will eventually find an alternative, and so will concerned, law-abiding citizens that strive to preserve their freedom. That would defeat any government attempt to coopt the technology and suppress bitcoin. Pandora’s box is open and that means a bitcoin bubble or a price crash, might only be temporary because bitcoin offers advantages that no other asset in human history can match.