Blockstream Bitcoin Satellite Taking Blockchain To The Moon And Back! 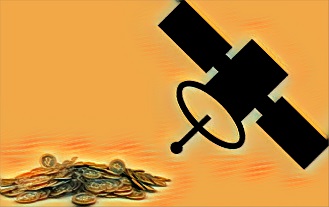 When bitcoin enthusiasts use the slogan “to the moon”, they do not mean it literally. Well, some people out there seem to have taken this slogan more seriously, and decided to get the blockchain one step closer to the moon, into outer space. Blockstream launched its bitcoin satellite project today, but it didn’t do it to satisfy enthusiasts who love the moon slogan. It did it with the aim of bringing cryptocurrency to the people who need it most on earth: those without reliable and affordable internet connections. The Blockstream bitcoin satellite will allow them to run a full node and participate in the bitcoin economy.

The Goal of the Blockstream Bitcoin Satellite Project

The Blockstream bitcoin satellite project has the aim of delivering on one of the key use cases for cryptocurrency: economic inclusion. That inclusion is needed the most in places where the economy is underdeveloped and people are at best partially communicated through internet connections. The best way to deliver the service in these areas is via satellite, allowing locals to use a TV dish and what Blockstream claims is relatively cheap computer technology, to run bitcoin nodes. These nodes will allow people in these isolated areas to transact and participate in the global economy.

The Blockstream bitcoin satellite project is the first initiative to bring bitcoin to these areas, but it is not the first project to suggest satellite communications to help people in isolated or underdeveloped areas to communicate with the world through the internet. Free Basics, a partnership between Facebook, Samsung, Ericsson, MediaTek, Opera Software, Nokia and Qualcomm, that aims to deliver basic internet services to underserviced areas of the world. Blockstream seems to have taken a page out of Free Basics with its bitcoin satellite project.

Is there a Blockstream Bitcoin Satellite up there?

In the meantime, the project covers areas such as Africa, Europe, a large part of North America, Central and South America. These are the areas that Blockstream wanted to cover during its first phase. The second phase will cover the rest of the world except for Antarctica.

To fuel the expansion of this project, Blockstream will have to invest more, while the project remains unprofitable. In the future, a Blockstream bitcoin satellite service may charge companies for the use of its infrastructure, but right now this project is not generating profits. It seems that this company is investing in a pure CSR – Corporate Social Responsibility – program, which might one day pay off. In the meantime, Blockstream has enjoyed a lot of attention due to this project. Bitcoin enthusiasts are excited to see that the blockchain is one step closer to the moon, and people in isolated places around the world, might be able to join them sooner rather than later thanks to the bitcoin satellite initiative.