Bitcoin as a Tax Haven 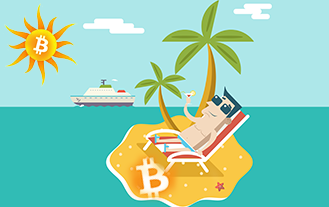 As the whole Panama Papers issue continues to control mainstream media headlines, Bitcoin, which has been identified as a possible tax haven, is coming closer to the center of attention. Bitcoin can arguably allow for any given person to hide a significant amount of wealth from the authorities. Although many of the legal scholars and tax experts still hold on to the misconception that bitcoin is anonymous, therefore untraceable, most of their rationale for branding cryptocurrencies as an instrument for tax evasion still holds true.

Leaving the whole pseudonymous vs anonymous aspect of bitcoin behind, Professor Omri Marian published in 2013 a paper on the 112 Michigan Law Review detailing how the currency and the system themselves could present a challenge for tax authorities and regulators. In this paper, Professor Marian underlines which are the intrinsic characteristics of Bitcoin that may allow it and other similar cryptocurrencies, to become tax havens. This is a short list of such characteristics:

The more tax experts and legal analysts look at bitcoin and other cryptocurrencies as a tax haven alternative, the less it makes sense to go through the pains of setting up shell companies through lawyer firms in Panama. Using bitcoin is much cheaper that recurring to all these intermediaries, and bitcoin is a lot less vulnerable to all the paper trail that led to the naming and shaming of people like Prime Minister David Cameron or the Prime Minister of Iceland – who was forced to resign. Besides that, the ease with which coins can be moved in and out of wallets is unparalleled, which could potentially give tax evaders an additional layer of protection.

That makes the whole Panama Papers debacle even more difficult to understand, unless the people who were looking for a tax haven trust fiat more than bitcoin. This is quite ironic. A person looking to evade taxes due to the authorities that stand behind the credibility of any given fiat currency, chooses to do so by using that currency which those authorities control.

Taking Professor Marian’s words a step further, the issue of credibility can create an additional paradox. According to Marian’s comments during a recent interview on Bloomberg TV, if most people decide not to pay taxes on bitcoin it could undermine the credibility of the currency because for it to become widely used it needs legitimacy. This means that fiat currency has enough legitimacy to support some money laundering without jeopardizing its value in the markets. However fiat, unlike bitcoin, has too many weaknesses as an instrument or a vehicle for tax evasion. But if bitcoin was widely used as a tax haven instrument, it would lose its legitimacy, which it has gained precisely through the same characteristics that make it a perfect tax haven instrument.

Making Sense of it all

Tax havens are not synonymous with tax evasion, although it might seem too suspicious for a person to re-direct funds towards a tax haven if they are indeed paying their taxes. In any case, enough of these tax haven accounts, the shell companies used to gain access to them and the secrecy involved in these endeavors, clearly points to suspicious activities. Bitcoin could serve as the perfect instrument to carry out all these operations to evade taxes, which in turn could damage its legitimacy. If bitcoin’s legitimacy is damaged, its value will be affected. That means that fiat actually creates a better environment for tax evasion, since most users do not have the wealth needed to create the kind of off shore tax haven accounts needed to hide their funds.

This means that unless every single hole in the international financial system is plugged, and people will no longer be able to use fiat to evade taxes through shell companies in tax havens, bitcoin will continue to stay at the fringe of tax evasion. However if the average citizen wants to enjoy the benefits that the most wealthy people enjoy through the use of fiat tax havens, they could recur to bitcoin. This is why governments would be wise to regulate cryptocurrencies more, while fighting fiat tax havens. Until then, there will be many more Panama Papers-like scandals, and bitcoin will be thrusted back into the tax evasion limelight time and time again, just for the sake of the argument.