Bitcoin, Other Cryptocurrencies Stumble Due To Bitfinex Hack 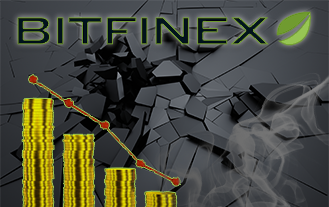 Cryptocurrency markets had been showing weakness lately on a variety of different reasons. Bitcoin had been trending slightly down, while Ether and Litecoin were also losing strength for different reasons. Then came the Bitfinex attack and the slight downward trend turned into a complete debacle. Ether was among the hardest hit cryptocurrencies, losing about a third of its value over the past 2 days, and the slide is bound to continue.

It is not the first time that a hacker or a group of hackers stealing cryptocurrency have managed to shake the markets, but this time the story is different. Not only did the hack come at a critical junction for some currencies, but the target of the attack was one of the most important bitcoin exchanges in Asia. Hong Kong based Bitfinex is also a unique exchange, offering margin trades and leveraged investment in cryptocurrency markets. This runs contrary to the principles of a sizable sector of cryptocurrency enthusiasts around the world.

Bitfinex offers trading on bitcoin, Litecoin and Ether pairs, but not yet on Steem and Classic Ether. This is probably the main reason why the value of Classic Ether increased as the others lost ground. The story behind the resilience of Classic Ether is especially interesting, given its recent rise to stardom due to Ethereum’s hard fork. In the aftermath of the Bitfinex hack, Classic Ether has risen to the third position in terms of cryptocurrency market cap, displacing Steem – which was itself the target of a smaller hack just recently.

Given the situation, and the fact that Classic Ether is gathering strength, while Steem is holding on to its value, as the hack hits other cryptcurrencies – especially Ether – has opened up a great opportunity for investors. Analyzing which of the most highly traded cryptocurrencies – namely bitcoin and Ether, or Litecoin to a lesser extent – will have the best chance to recover swiftly, can yield a good upside for disciplined investors who are willing to take the risk. Nevertheless, going a step further and understanding why the markets rewarded Classic Ether and didn’t punish Steem as much, while hammering more widely used and traded cryptocurrencies, may uncover even more interesting market opportunities.

The Triumph of the Underdogs

Once the extent of the damage is known – Bitfinex has not released the details of the attack yet – cryptocurrency enthusiasts and investors alike will be able to understand what went wrong and take the necessary measures to prevent something similar from happening again. However, the hack has shown that cryptocurrency value resilience is not only a question of security. Paradoxically, the market reaction to the hack shows that some of the hardest hit cryptocurrencies are also the ones that have had considerable market success. The underdogs, which are not widely traded yet, were not only spared the pain but were even buoyed by the market reaction to the attack.

This shows that some of the benefits that come with market success, can make cryptocurrency values more vulnerable. However, the Bitfinex hack also came at a critical junction for many leading cryptocurrencies, which could also make it unique insofar as the validity of any lessons that can be drawn from it go in terms of cryptocurrency value. For Ether, this unfortunate attack marks the second time in its history that its value was affected by hacks directed at entities related to Ethereum but not at the network itself. It also comes after the hard fork and the establishment of Ethereum Classic. This shows how fickle cryptocurrency valuations might be, especially when the best established one, bitcoin, took a hit once again for an attack that has nothing to do with it directly.

Click here to read the official statement on the attack from Bitfinex.