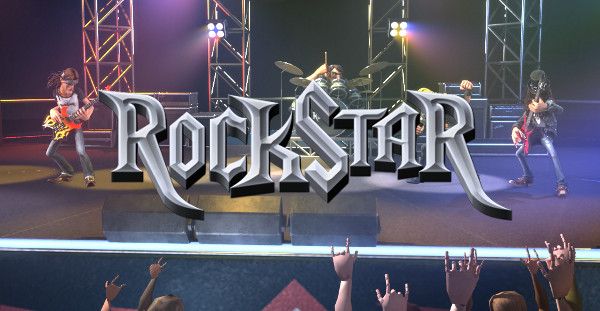 If it was ever your dream to be a RockStar and take to the road in a bus, all the while hot groupies are throwing panties and bodies at you, then this Betsoft gem is for you. An authentic look into what its like to be a tequila swilling, cigarette smoking, chick pulling RockStar.

The stage is set on the screen with bright lights, scaffolding supporting the reel posters and the band set up ready to go with the control buttons on and around the equipment.

Going on the road with boys, living the high life with wads of cash and bottles of Jack Daniels flowing freely.  All the while you will experience the rewards of gold and platinum record sales and being on the cover of Rolling Stones Magazine.  Winning is the name of the game while playing RockStar. The best is this game is fully mobile optimized, so you can jump on the bus at any time.

The stage lights up, and the gig goes wild on 5 reels with an option of 30 pay lines to reach the ultimate – a standing ovation when you win big.

Going on Tour is a First Class Ride all the Way

This game brings it all, sex, drugs and rock ‘n roll. Heavy rock music blares in the background while tequila is drunk in copious amounts. Betsoft has never offered such an edgy real to life rock experience. The characters are animated in such a way that you can almost smell the whiskey and cigarettes on their breath.

The game itself offers a few excellent features to bring some great wins your way. You even get to sit back and listen to a cool solo or two.

Players both novice and experienced may be surprised that there is no progressive jackpot, and neither are there any free spins on this electrifying slot. However, with everything that is going on, on the reels, and in the feature rounds, you will barely notice them as missing. The game has enough to go on without the old regulars.

Betsoft definitely gets a standing ovation for this one. Perhaps it will be admitted to the Rock ’n Roll hall of fame!

Where to Play RockStar